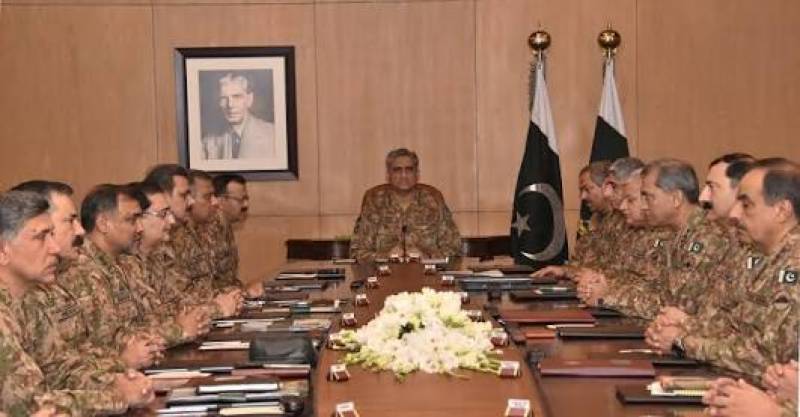 Rawalpindi (Staff Report): Pak Army will play its ‘due role’ in a legal and transparent manner as part of the Supreme Court-ordered Joint Investigation Team (JIT) which will probe Prime Minister Nawaz Sharif and his children, the corps commanders resolved on Monday.

Inter-Services Public Relations (ISPR) in a statement said the forum had discussed the apex court's Panama case verdict with special reference to the JIT.

"The forum pledged that the institution, through its members in the JIT, shall play its due role in a legal and transparent manner, fulfilling [the] confidence reposed [in the military] by the apex court," the ISPR said.

According to the communiqué, the 202nd Corps Commanders Conference discussed the Panama Case verdict by the Supreme Court of Pakistan “with special reference to JIT”. The participants of the meeting also reviewed progress of the ongoing countrywide military offensive Operation Radd-ul-Fasaad.

CCC at GHQ. "Institution, through its members in JIT shall play its due role in a legal & transparent manner fulfilling confd reposed by SC" pic.twitter.com/H9wRjrz7P1

The Supreme Court had ordered to form a JIT to investigate the PM and his family's business dealings abroad.

The JIT is to include officials from the National Accountability Bureau, the Federal Investigation Agency (FIA), the State Bank of Pakistan, Inter-Services Intelligence (ISI) and Military Intelligence (MI), and will be led by an assistant director general level officer from the FIA, according to the order.