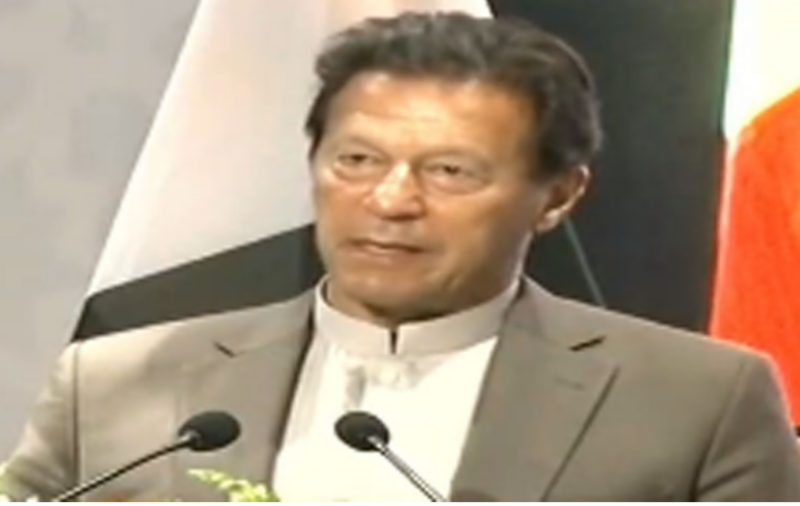 Colombo (Web Desk): Prime Minister Imran Khan on Wednesday said that Kashmir issue can only be resolved through dialogue.

The premier made these remarks while addressing the Pakistan-Sri Lanka Trade and Investment Conference in Colombo.

The conference was organised in a bid to explore avenues of collaboration in diverse fields between the two counties.

PM Imran said that the way forward for the sub-continent is to resolve differences and improve trade relationship.

“Kashmir is the only dispute between India and Pakistan which should be resolved as per the UN resolutions,” Imran Khan said, adding that differences can only be resolved through dialogue.

Imran Khan said he came to politics with the dream of a welfare state and poverty alleviation.

"Twenty five years ago, I entered politics because I felt that the best way to reduce poverty in our country was to setup a welfare state," Khan said adding that he realised that the Sri Lankan leadership was also motivated by poverty alleviation.

Imran Khan said terrorism has affected both Pakistan and Sri Lanka and counties in the region can end poverty by establishing trade relations.

He also suggested the formation of a bloc along the lines of the European Union (EU) to promote trade.

The prime minister said Pakistan and Sri Lanka could explore the idea of generating wealth through joint business activities and diverting the wealth to alleviate poverty.

PM Imran Khan offered the Sri Lankan businessmen to explore the immense opportunities offered by the government of Pakistan in the form of ease-of-doing business.

Imran Khan invited the Sri Lankan business community to participate in the China-Pakistan Economic Corridor (CPEC) project that opens the opportunity for them right up to Central Asia.

He said incentives have been offered to the business community to invest in Special Economic Zones (SEZs) being established in Pakistan.

He said the current government is committed to take advantage of the geographical location of Pakistan to make it an economic hub.

He said economic diplomacy is also one of the most important components of our foreign policy to give boost to the economic activities.

The minister said Pakistan's economic indicators are on the positive trajectory.

He said Pakistan has taken numerous steps to ensure ease of doing business and remarkable achievements have been made in this regard.

He said the country's real estate and housing sectors are also flourishing and contributing to the country's progress and prosperity.

Speaking on the occasion, Adviser on Commerce and Investment Abdul Razak Dawood said Pakistan's economy has shown remarkable turnaround during the COVID-19.

“Pakistan provides great opportunities to businessmen to come, invest and enjoy the lucrative environment there,” Dawood said adding that the business communities of both the countries must work hard to further build economic relations.

Addressing the ceremony, the Sri Lankan State Minister for Commerce said bilateral cooperation in trade is of vital importance to alleviate poverty, the Radio Pakista reported.

He stressed the need for promotion of South-South dialogue and partnership.

The minister said both the countries need to enhance cooperation in trade and investment.

He said the resource gap can also be bridged with the promotion of investment.