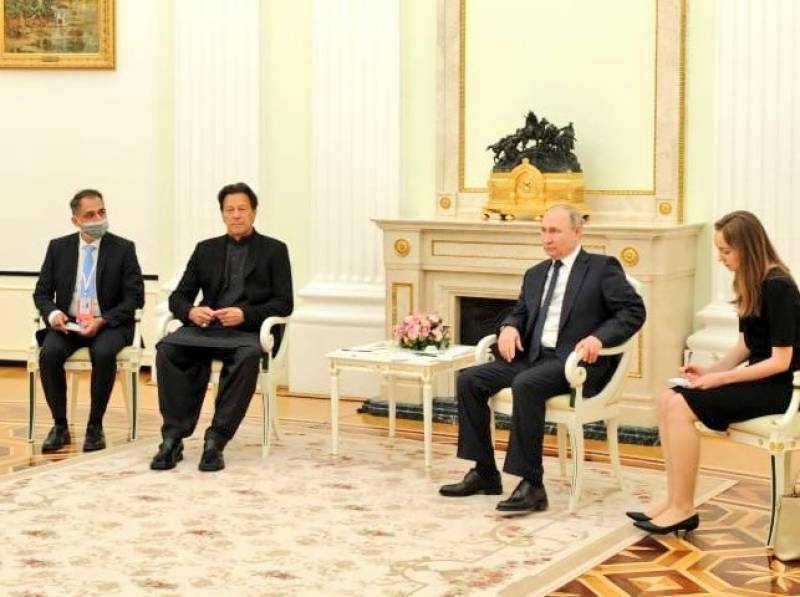 Regional situation including the developing scenario of Ukraine also came under discussion during the meeting.

On his arrival at Kremlin, the executive headquarters of the Russian Federation, PM Imran Khan was warmly received by President Putin.

Earlier in the day, PM Imran Khan laid a floral wreath at ‘Tomb of the Unknown Soldier’, a war memorial dedicated to the Soviet troops fallen during World War II.

The premier visited the memorial at the Kremlin Wall and paid his respects to the soldiers.

The national anthems of Pakistan and Russia were played on the occasion as the prime minister observed a moment of silence in respect for the fallen troops.

Prime Minister Imran Khan, on the invitation of Russian President Vladimir Putin, arrived in Moscow on Wednesday on a two-day official visit, where he was received at the airport by Russia's Deputy Foreign Minister and presented with a guard of honour.

According to a statement by the Foreign Office (FO), Important leadership of Russia, including deputy prime minister, investors, and businessmen will also meet PM Imran Khan.

Pakistan and Russia enjoy friendly relations marked by mutual respect, trust and convergence of views on a range of international and regional issues.

This is the first bilateral visit by a Pakistani prime minister to Russia after a gap of 23 years and is being termed as a historic step to renew relations between the two countries.

The last Pakistani premier to visit Russia was Nawaz Sharif in March 1999, while former president Asif Ali Zardari came to Moscow in 2011.

In his remarks on the occasion, FM Qureshi said that Pakistan attaches special importance to bilateral relations with Russia. He said relations between Pakistan and Russia have gradually strengthened.

He said that Pakistan is pursuing the agenda of promoting economic priorities and regional ties under the vision of Prime Minister Imran Khan.