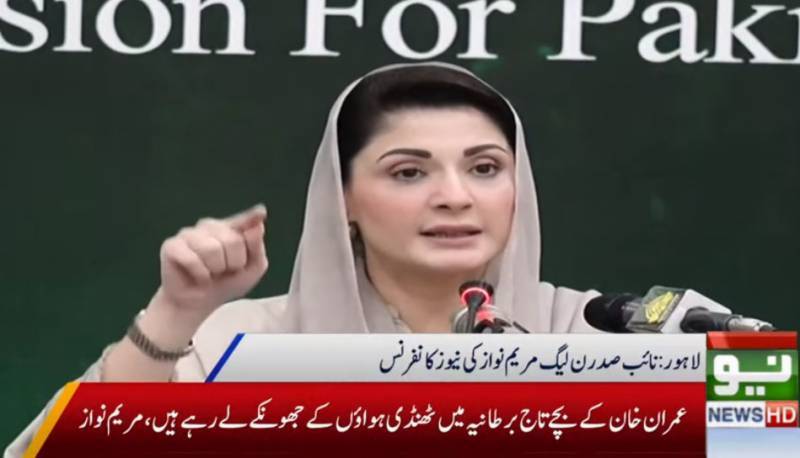 Addressing a press conference in Lahore, the PML-N leader said that that PTI chief wants to create anarchy in Pakistan by plotting against the state institutions.

"When he says that he has recognised the real faces of Mir Jafar and Mir Sadiq, then do you think he is referring to Maryam Nawaz, Nawaz Sharif, or Shehbaz Sharif? Our faces are etched on his heart. He does not sleep because our faces keep revolving in his mind," she said.

Maryam Nawaz said that the PTI chairman also launched "a malicious campaign against the judiciary, in which abusive words were used against the judges" as they issued a historic verdict of restoring the National Assembly after President Arif Alvi had dissolved the lower house.

He ran malicious campaign against judiciary and then started praising courts when it took notice of money laundering case against Prime Minister Shehbaz Sharif, she added.

"Give decision in favour of the people and don’t come under any pressure," Maryam urged the courts.

While holding the PTI chief responsible for the death of a police constable, Maryam said the incident has exposed the “ugly face and ill intentions” of the ousted premier.

The PML-N leader accused the PTI of stockpiling weapons, tear gas shells and batons to spread anarchy in the country under the guise of protest rally.

Maryam's press conference comes after the federal government decided to not let the PTI's long march go ahead following late-night raids and arrests of the party's leaders.

On the other hand, PTI xchairman Imran Khan Imran Khan on Tuesday said that he will lead a biggest procession in Pakistan's history on May 25.

Addressing a press conference in Peshawar, the PTI chief said that that he will leave for Islamabad tomorrow despite incumbent government's announcement of stopping his long march.

Imran Khan said  that country's judiciary and 'neutrals' should "do the right thing".

The PTI chief also asked the officials to defy the orders of the 'imported and corrupt' government, stating it was their legal right to defy unlawful orders.