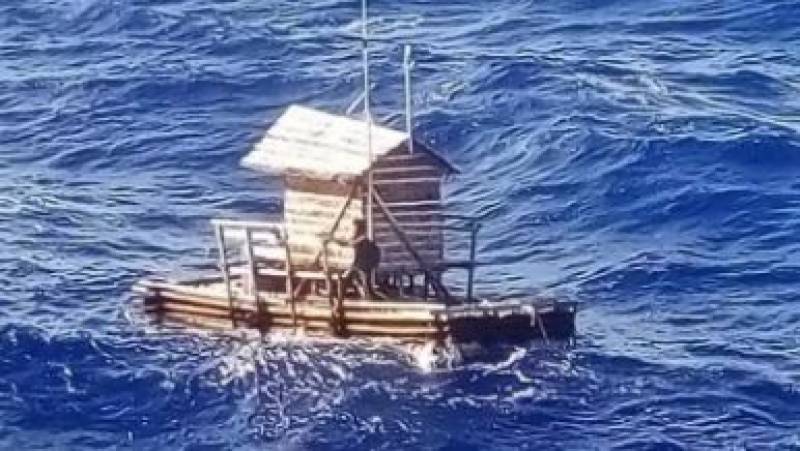 Jakarta (Agencies): An Indonesian teenager who looked after a fishing hut survived for 49 days at sea as his tiny fishing trap lost its moorings and ended up some 2,500 kilometres (1,500 miles) away in waters near the Pacific island of Guam, his family said Monday.

The 19-year-old, from the Indonesian island of Sulawesi, worked on a "rompong" - a floating fish trap without any paddles or engine.

His job was to keep the vessel’s lamps lit to attract fish. Its owner would reportedly come by weekly to drop off food, clean water, fuel and other supplies.

Rompongs are a traditional form of trapping fish in Indonesia, but are often unmanned, secured by buoys and ropes.

Local media reported that the owner of Adilang’s rompong had as many as 50 moored in the surrounding waters.

The teen, who only had enough food to last several days, survived by catching fish, Mirza Nurhidayat, the Indonesian consul general in Osaka, who oversaw his eventual return, told the Jakarta Post.

"After he ran out of the cooking gas, he burned the rompong´s wooden fences to make a fire for cooking," he was quoted as saying.

"He drank by sipping water from his clothes that had been wetted by sea water."

About ten ships passed the malnourished teen before a Panamanian-flagged vessel rescued him on August 31 near Guam and brought him to Japan, its original destination.

"I was shocked when his boss told us," he had been rescued, Adilang´s mother said. "I was so happy."

Adilang is the youngest of four siblings and arrived back home on September 8, in good health despite his ordeal.