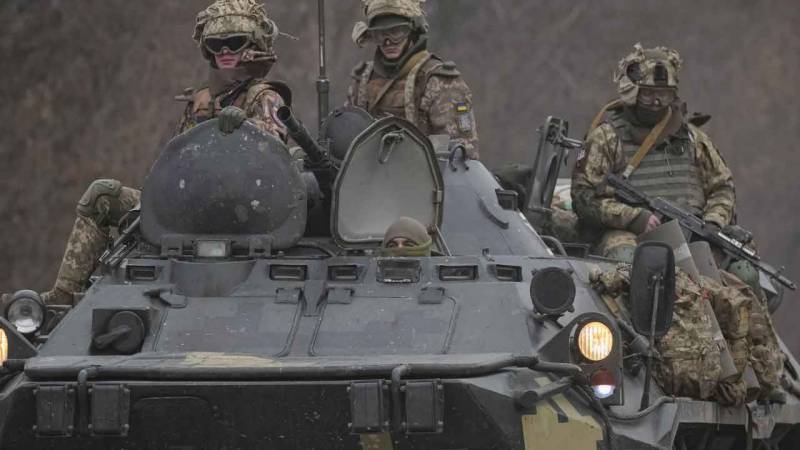 Kyiv (Web Desk/Agencies): Russian troops stormed towards the capital Kyiv overnight on Saturday, but were met with heavy resistance and fighting by Ukrainian forces, as the country's Volodymyr Zelenskyy vowed to fight on.

Street fighting broke out in the capital, with the Ukrainian military claiming it is successfully fending off Russian assaults.

But the swift movement of the troops after less than three days of fighting further imperiled a country clinging to independence in the face of a broad Russian assault.

Meanwhile, Ukrainian president Volodymyr Zelenskyy made a renewed assurance that the country's military will stand up to the Russian invasion.

In a video posted on Twitter on Saturday morning he said to "not believe in any fake news, I am still here."

Zelenskyy was also urged by the US government to evacuate Kyiv but he turned down the offer, according to a senior American intelligence official with direct knowledge of the conversation.

The official quoted the president as saying that “the fight is here” and that he needed anti-tank ammunition but “not a ride.”

City officials in Kyiv urged residents to take shelter, to stay away from windows and to take precautions to avoid flying debris or bullets.

The Kremlin accepted Kyiv’s offer to hold talks, but it appeared to be an effort to squeeze concessions out of the embattled Zelenskyy instead of a gesture toward a diplomatic solution.

On Friday, Volodymyr Zelenskiy had vowed to stay in Kyiv as his troops battled Russian invaders advancing toward the capital in the biggest attack on a European state since World War Two.

Volodymyr Zelensky said there was now a “new iron curtain” between Russia and the rest of the world, like in the Cold War.

Zelensky called the attack on Chernobyl “a declaration of war on all of Europe” while 18 people were killed at a military base near the Black Sea port of Odessa in the deadliest single strike reported by Kyiv.

Ukraine also said a military plane with 14 people on board crashed south of Kyiv and that officials were determining how many people died, while a transport plane crashed in Russia killing the crew.

On Thursday, Russia launched its invasion by land, air and sea following a declaration of war by President Vladimir Putin.

US and Ukrainian officials say Russia aims to capture Kyiv and topple the government, which Putin regards as a puppet of the United States.

Russian troops seized the Chernobyl former nuclear power plant north of Kyiv as they advanced along the shortest route to Kyiv from Belarus to the north.