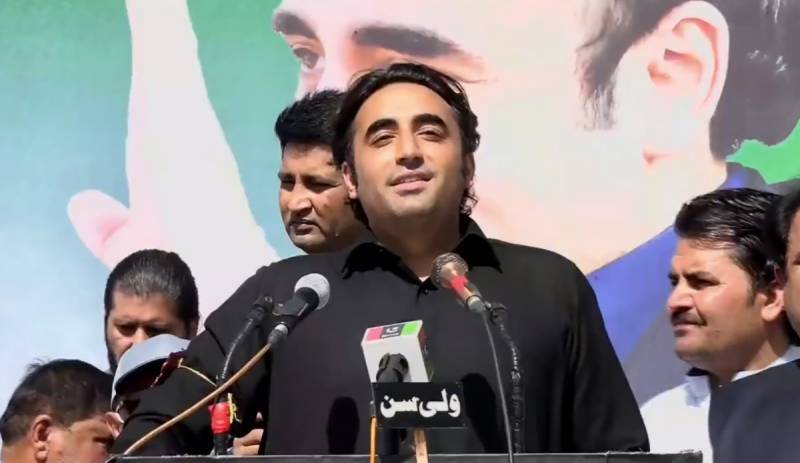 Parachinar (Web Desk Pakistan Peoples Party (PPP) Chairman Bilawal Bhutto Zardari on Saturday said that the institutions belong to the people and the opposition will not allow to make country's institutions controversial for one person.

Addressing a public gathering in Parachinar, the PPP chairman said that Imran Khan has lost the majority and he is no longer the prime minister.

Bilawal said he does not recognize the selected government which came into power through rigging from day one.

He said The Riyasat-e-Madina was founded on principles of good conduct but on the other hand, PTI’s politics are based on propaganda as every promised they made to the masses was a lie, he claimed.

Criticising the policies of the incumbent government, the PPP chief said that the country is facing “historic inflation” due to economic mismanagement.

He said that Imran Khan promised the nation 100 million jobs and promised to not turn to the International Monetary Fund (IMF) but he failed.

Referring to the vote of no-confidence, Bilawal said that he has been waiting for the political contest since March 8. "But the PM refuses to come forward. Demonstrate your sportsman spirit, Imran, and come forward if you have the courage,” the opposition leader asserted.

“Bring a total of 172 members to the assembly and we will recognise you as the prime minister,” Bilawal said as he challenged the premier.

Criticising the PM, Bilawal said: “The PM used to say that he would become the ambassador of Kashmir, but he ended up becoming the lawyer of Kulbhushan Jadhav.”

"Imran Khan says Bilawal's Urdu is weak. I admit that my Urdu is weak after 30 years, but Imran Khan cannot speak the language even after 70 years," he said.

“If my Urdu is weak then you should teach Urdu to your three children,” Bilawal said in reference to PM Imran's children who live abroad.

We are proud of our national language and we will get better, but know that Pakistan is a country of speakers of every language, Bilawal added.