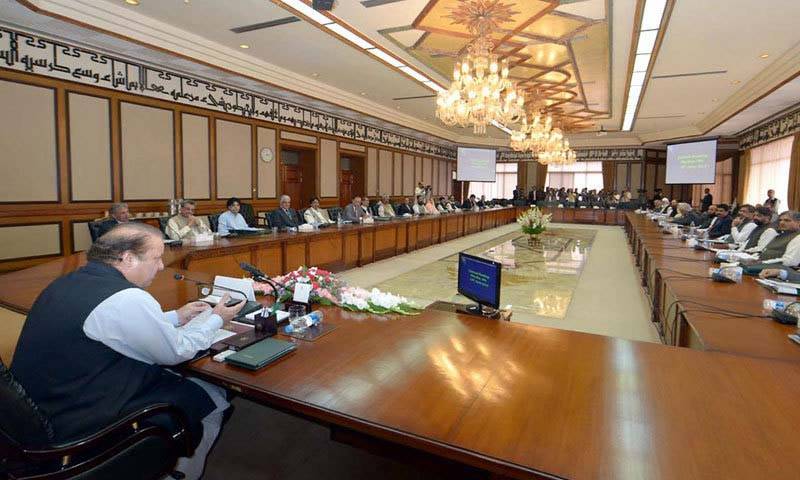 The cabinet meeting was held under the chair of Prime Minister Nawaz Sharif, in which FY 2017-18 budget was approved.

While unveiling the Economic Survey 2016-17 in a press conference on Thursday, Dar said this year’s growth rate is highest in 10 years, adding that 3.4 percent increase has been recorded in electricity, gas supply in the existing fiscal year.

"We are now targeting 6pc growth for next year," he said and added that the government also met its budget deficit target of 3.8pc, with the actual deficit registering at 3.7pc.

The government missed its trade deficit target of Rs 20.4 billion, with the deficit widening to Rs 24 billion in the period reviewed, the minister said.

The current account deficit expanded to $7.25bn for the year, and is expected to reach 2.7pc of GDP by the end of this year.

Kissan package worth 341 billion rupees has paid the dividends to raise its growth to 3.46 percent this year.

Under the Kissan package, he said the agriculture inputs including fertilizers were subsidized. He said the production of different major crops also witnessed an increase during the period.

He said efforts are being made to further improve cotton production in order to domestically meet the demand of textile industry.

About the agriculture credit, he was confident that it will achieve the target of seven hundred billion dollars this year.

Ishaq Dar said inflation according to Consumer Price Index was 8.69 percent in 2013-14 and it is is expected to close at 4.09 percent at the end of the current financial year as a result of measures taken by the Government.

Upbeat about the performance of stocks, the Finance Minister said the market capitalization has doubled over the last four years. He said the decision of merging different stocks into Pakistan Stock Market helped earn the status of best performing market in Asia and the fifth largest in the world.

He was confident to close the financial year at the fiscal deficit of four point two percent which was eight point eight percent when the present government assumed power.

About the net public debt, the Finance Minister said it stands at 18892 billion rupees which is 59.3 percent of the GDP.

About the war on terror, the Finance Minister said that it has cost the country 123.13 billion dollars. He said the country is annually spending ninety to one hundred billion rupees in the war on terror. He said that one hundred billion rupees will be set aside for the next fiscal year for the rehabilitation and reconstruction of tribal areas. The amount will also be used for raising new wings of civil armed forces.