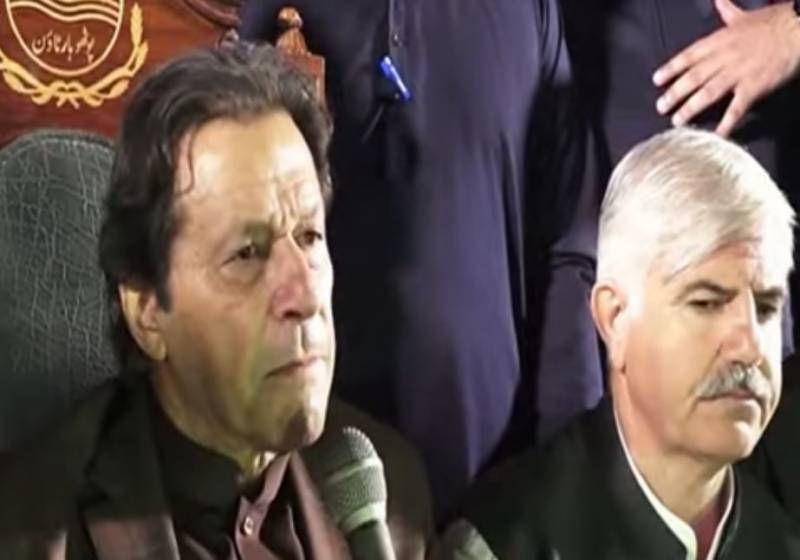 Rawalpindi (Staff Report/Agencies): PTI Chairman Imran Khan says that hat his party has decided not to remain part of the current political system and will resign from all the assemblies.

“Instead of marching towards Islamabad, we have decided not to be part of this political system. We have decided to quit all the assemblies and get out of this corrupt system,” the former prime minister said at his first address to public gathering in Rawalpindi’s “Haqeeqi Azadi march” after being injured in a gun attack earlier this month.

Imran Khan once again demanded a free and fair elections in the country saying economic stability links with political stability.

“When I was leaving for Rawalpindi from Lahore, everyone advised me against travelling due to wounds in my leg,” he said at the start of his first address to public gathering in Rawalpindi’s “Haqeeqi Azadi march” after being injured in a gun attack earlier this month.

Imran said families like Sharifs and Zardaris are responsible for weakening Pakistan’s institutions in a bid to protect their “looted wealth”.

Imran Khan deplored that he had failed in one thing during his 3.5 years of government, which he said was to bring the powerful under the law. He lamented that the National Accountability Bureau (NAB) and other institutions were not truly under his control and received orders from behind from somewhere else.

“The ones who had control never gave an order [to proceed with investigations]. Instead of putting them (criminals) in jails, they (the establishment) were making deals with them.”

“Establishment was not part of conspiracy but they did not stop their [then opposition] conspiracy to come to power.”

The former prime minister reached Rawalpindi through a chartered plane that landed at the Nur Khan Air base and arrived in Rawalpindi via helicopter.

PTI leader Fawad Chaudhry said the party’s demand for fresh elections isn’t undemocratic and the coalition government should announce elections date as “this is the only solution.”

SSP Operations and CPO Rawalpindi briefed the officials over the security arrangements in place. The RPO also inspected the security around the stage and visited the duty checkpoints on Murree road.

On Friday, The deputy commission of Rawalpindi has granted conditional permission to Pakistan Tehreek-e-Insaf (PTI) for holding a public rally in Faizabad area of Rawalpindi on November 26.