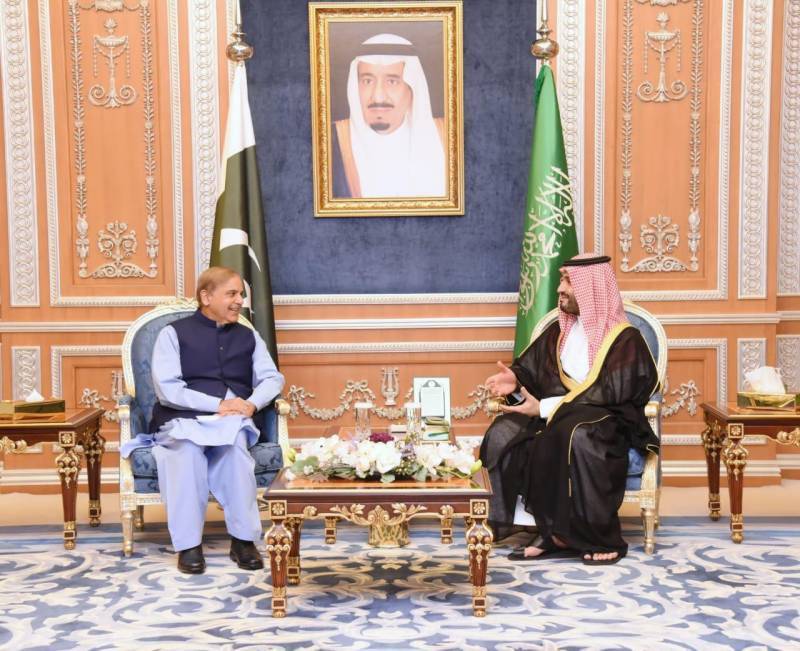 The two reviewed the entire gamut of bilateral relations and reaffirmed their commitment to further strengthen the fraternal bond between Pakistan and Saudi Arabia, the Radio Pakistan reported on Wednesday.

PM Shehbaz thanked the Saudi leadership for extending assistance to Pakistan during the recent devastating floods, particularly for establishing the air bridge between Riyadh and Islamabad to provide relief goods in flood affected areas.

Speaking on the occasion, Mohammed bin Salman termed the fraternal ties between Pakistan and Saudi Arabia very important for the two countries as well as for the region and the world.

He said they agreed to upgrade and enhance bilateral ties and fraternal bonds between Pakistan and Saudi Arabia to new heights in line with the requirements of changing world.

Shehbaz Sharif said he told Mohammed Bin Salman that people of Pakistan are eagerly looking forward to his visit.

Just had excellent meeting with HRH Cown Prince Mohammed Bin Salman. We agreed to upgrade & enhance bilateral ties & fraternal bonds b/w ???????? & ???????? to new heights in line with the requirements of changing world. I told HRH people of Pakistan are eagerly looking forward to his visit.

The premier prayed for the peace and prosperity of Pakistan as well as Muslim ummah.

Earlier on Tuesday, Prime Minister Shehbaz Sharif also addressed the Future Investment Initiative Conference, and highlighted the importance his government attaches to enabling participation of Pakistani youth to become agent of change in the technology world.

He invited the international community to benefit from Pakistan’s trained IT professionals.

The prime minister underlined his government’s firm resolve to facilitate all investors coming to Pakistan.