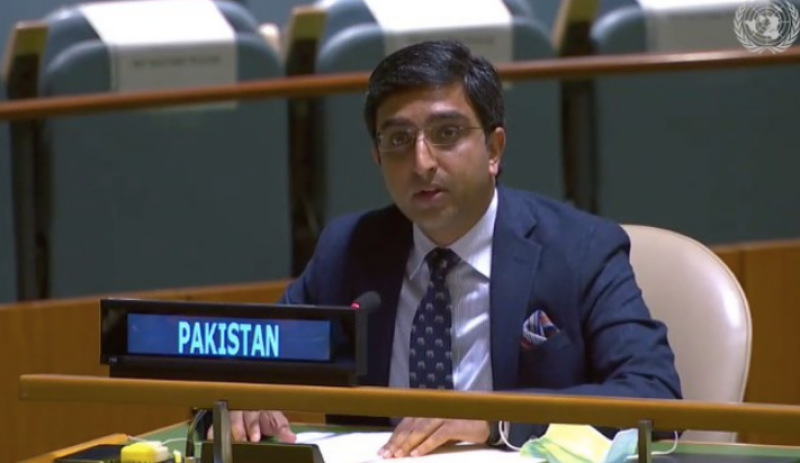 New York (Web Desk): Pakistan has said that Jammu and Kashmir is not a part of India; it never was and it never will be.

Exercising Pakistan's right of reply to the statement by the representative of India at the United Nations General Assembly (UNGA) session, Pakistan's representative Zulqarnain Chheena said India has no claim to Jammu and Kashmir than that of a military occupier.

Pakistan’s representative said the state of Jammu and Kashmir is a disputed territory and India is compelled to use naked force to impose its occupation on an unwilling and oppressed people.

“ Jammu & #Kashmir is not a part of India; it never was and it never will be.” Extremely honoured to deliver Pakistan’s 1st Right of Reply in the #UNGA General Debate during the 75th Session https://t.co/0jUA8imPxP via @YouTube

He said as decreed by the Security Council, the final disposition of the state will be made in accordance with the will of the people expressed through the democratic method of a free and impartial plebiscite conducted under the auspices of the United Nations (UN).

Pakistan’s representative said the Kashmiris have a legitimate right to resist Indian occupation by all means at their disposal.

Chheena said that Kashmir will be free one day. This is not only a lesson of history; it is also an imperative of justice.

“Kashmiris are not alone in their just struggle. The people of Pakistan, people of the Islamic world, indeed, all freedom-loving people, are with the Kashmiris,” he said.

He said the Indian diatribe was another shameful attempt to deflect attention from the real issues.

Zulqarnain said India cannot escape accountability for its crimes in occupied Jammu and Kashmir and against its own Muslims and other minorities.

India is also actively involved in orchestrating, financing and providing logistical support to terrorist organizations, like TTP and Jamaat-ul-Ahrar to target Pakistan from across our borders, he said adding that Commander Kulbhushan Yadav, an Indian intelligence agent, captured by Pakistan, has confessed that he was organising and supporting these criminal groups to perpetrate terrorism in Pakistan.

Pakistan’s representative said that the BJP and RSS extremists continue to espouse the fiction of "Akhand Bharat" where minorities either convert to Hinduism or become second class citizens.