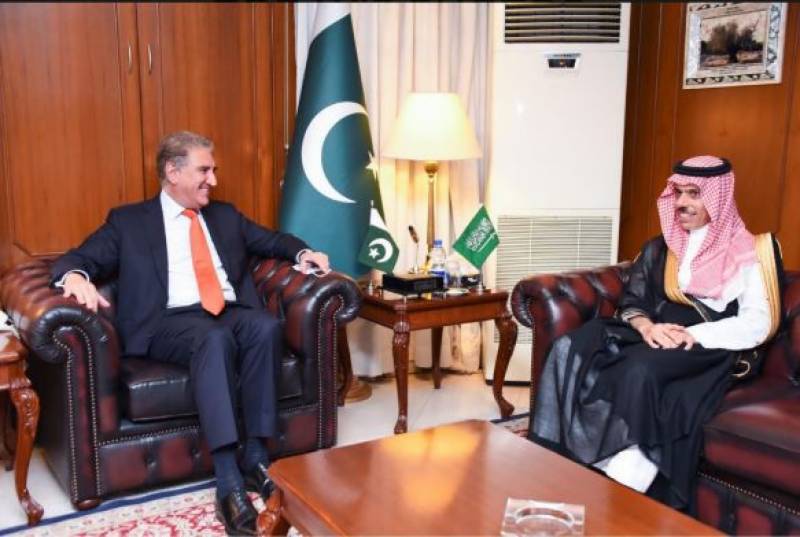 Islamabad (Web Desk): Pakistan and Saudi Arabia on Tuesday pledged to expand the dimensions of relationship particularly in the economic domain including cooperation in trade, investment and technology through the Saudi-Pakistan Supreme Coordination Council (SP-SCC).

“The establishment of SP-SCC is an important milestone to take the bilateral relationships between the two countries to new levels and explore new opportunities of cooperation,” Faisal Bin Farhan Al Saud said.

He said that both the countries will encourage their business community to interact more frequently to further strengthen the economic relations.

The Saudi foreign minister said his country values the contributions made by Pakistani community in the economy of the Kingdom.

Alluding to the commonality of views on regional issues, the Saudi foreign minister said Pakistan and Saudi Arabia have agreed to continue to work together including on Kashmir, Palestine, Afghanistan and Yemen to facilitate regional peace and stability.

In his remarks on the occasion, Foreign Minister Shah Mahmood Qureshi said the talks primarily focused on promoting bilateral trade and investment.

“The two sides have made a good progress towards the activation of SP-SCC,” he said, adding that there will be focal persons in both the countries to oversee progress on this front.

He said our skilled, semi-skilled workforce and professionals can also make significant contributions to the Saudi vision 2030.

He said that both the sides also discussed ways and means to promote cooperation in the area of climate change.

“Saudi Arabia is also part of Organisation of Islamic Cooperation (OIC) Contact Group on Jammu and Kashmir,” he said, adding that the Kingdom has been supportive and has shown clarity in supporting Pakistan on the disputed territory.

Earlier, Pakistan and Saudi Arabia held delegation-level talks to discuss bilateral matters besides the issues of regional and international importance.

In his welcome remarks, FM Qureshi said Pakistan and Saudi Arabia enjoyed commonalities in their relationship based on religion, culture and history.

“The two countries stood by each other in difficult times”, Qureshi said, adding that Pakistan was committed to the security and solidarity of the Kingdom of Saudi Arabia.

He lauded the active role played by Saudi Arabia for peace in the region, particularly reducing tension in the Gulf.

FM Qureshi expressed gratitude to the government of Saudi Arabia for supporting Pakistan’s stance on India’s illegal act of revocation of the special status of Jammu and Kashmir.