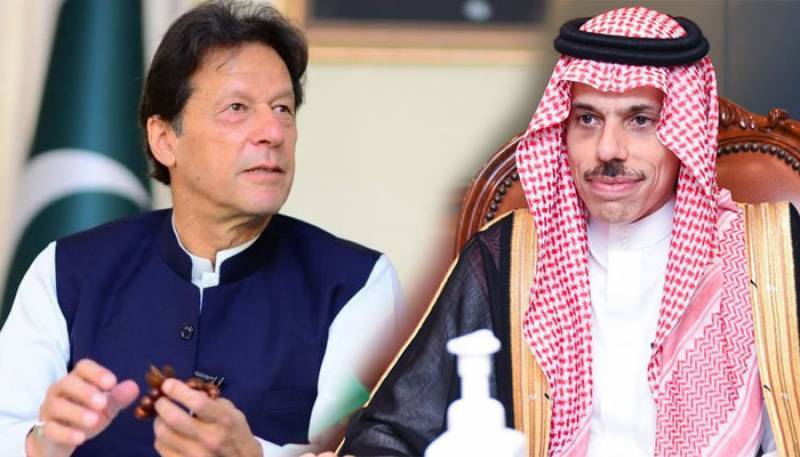 Islamabad (Web Desk): Prime Minister Imran Khan on Tuesday emphasised the need for strengthening of Pak-Saudi economic relationship and taking steps for realizing the vast possibilities in the fields of trade, investment and energy.

The premier expressed it during a meeting with Saudi Foreign Prince Faisal bin Farhan Al Saud who called on him in Islamabad.

PM Imran extended warm welcome to the foreign minister and reaffirmed deep-rooted and historic bonds between Pakistan and Saudi Arabia.

The prime minister appreciated the work relating to activation of the Saudi-Pakistan Supreme Coordination Council (SP-SCC), which is the highest level platform designed to impart strategic direction to the development of Pakistan-Saudi Arabia relations.

Thanking the prime minister for the warm welcome accorded to the Saudi delegation, Prince Faisal underscored the importance that Saudi Arabia attaches to its strong relationship with Pakistan, based on bonds of brotherhood.

He reaffirmed the resolve to take all possible measures to further strengthen the bilateral relationship under the strategic direction set by the Crown Prince and the Prime Minister.

The need to broaden spectrum of bilateral relations in all areas of mutual interests was discussed during the meeting.

President Alvi said that Pakistan highly values its ties with KSA and wants to further expand economic and trade relations with the brotherly country.

Earlier, Pakistan and Saudi Arabia pledged to expand the dimensions of relationship particularly in the economic domain including cooperation in trade, investment and technology through the SP-SCC.

“The establishment of SP-SCC is an important milestone to take the bilateral relationships between the two countries to new levels and explore new opportunities of cooperation,” Faisal Bin Farhan Al Saud said.

He said that both the countries will encourage their business community to interact more frequently to further strengthen the economic relations.

The Saudi foreign minister said his country values the contributions made by Pakistani community in the economy of the Kingdom.

Alluding to the commonality of views on regional issues, the Saudi foreign minister said Pakistan and Saudi Arabia have agreed to continue to work together including on Kashmir, Palestine, Afghanistan and Yemen to facilitate regional peace and stability.

In his remarks on the occasion, Foreign Minister Shah Mahmood Qureshi said the talks primarily focused on promoting bilateral trade and investment.

“The two sides have made a good progress towards the activation of SP-SCC,” he said, adding that there will be focal persons in both the countries to oversee progress on this front.

He said our skilled, semi-skilled workforce and professionals can also make significant contributions to the Saudi vision 2030.

He said that both the sides also discussed ways and means to promote cooperation in the area of climate change.

“Saudi Arabia is also part of Organisation of Islamic Cooperation (OIC) Contact Group on Jammu and Kashmir,” he said, adding that the Kingdom has been supportive and has shown clarity in supporting Pakistan on the disputed territory.