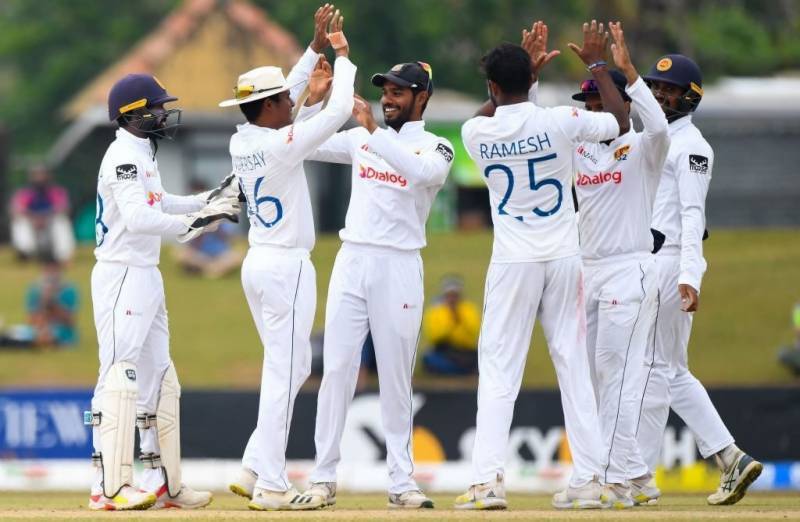 Pakistan side was bowled out for 261 in the second innings on day five in chase of a mammoth 508 runs target as the touring team failed to overpower bowlers of the host team.

Earlier, Babar Azam and Imamul Haq opened the day with Pakistan at 89-2. However, the host team bagged an early wicket when Ramesh removed Haq at 49.

On day 4, Pakistan made an impressive start, however, bad light followed by rain curtailed the day as play was called-off with 26 overs left undelivered.

After a promising start, the visitors lost Abdullah Shafique for 16 after a 42-run opening stand. Imam-ul-Haq finished the day at an unbeaten 46 off 80 balls (four fours).

Imam and captain Babar Azam have so far added 47 runs for the second-wicket, Babar was not out on 26 off 38 balls (two fours and one six).

On Wednesday, Dhananjaya de Silva was Sri Lanka’s second innings’ star performer. The right-hander scored the ninth century of his Test career to spearhead his side’s progress to their 500 plus overall lead.

Resuming at 176 for five, de Silva and captain Dimuth Karunaratne took their sixth-wicket partnership to 126. Nauman Ali provided Pakistan their first breakthrough of the day when he had Karunaratne smartly caught by Abdullah at short-leg. Karunaratne scored 61 off 105 balls with the help of three fours.

Sri Lanka continued to progress at a healthy rate as Pakistan bowlers searched for wickets. Debutant Dunith Wellalage fell for 18 to Mohammad Nawaz, Sri Lanka took lunch at 297 for seven – overall lead of 444.

De Silva completed his century off 159 balls, the seasoned batter found an able ally in Ramesh Mendis who followed his first innings all-round exploits (35 and five wickets) with an unbeaten 45 (54 balls, five fours).

The pair added 82 for the eight-wicket before de Silva was run out via a direct hit by Yasir Shah. Sri Lanka declared their innings at 360 for 8. Naseem Shah and Nawaz took two wickets each for Pakistan.

The defeat has sent Pakistan to the number five spot in the ICC World Test Championship 2021-23 rankings while Sri Lanka have moved up to number three.

On July 20, Pakistan, defeated Sri Lanka by four wickets in the opening Test at Galle.