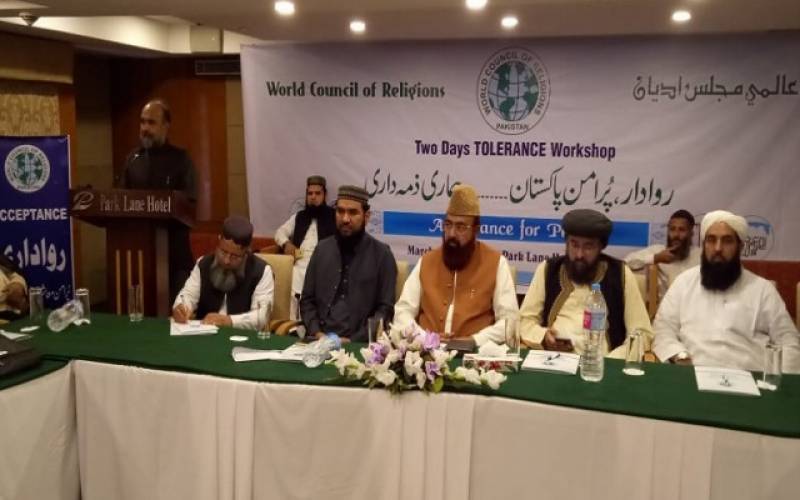 Lahore (PR): The World Council of Religions has once again stressed the religious leaders to opt national narrative regarding peace so that a message of harmony is transcended across borders.

Dr Qibla Ayaz, the chairman of Council of Islamic Ideology, declared that terming someone ‘infidel’ is contradictory to the Islamic injunctions.

Addressing the audience at a two-day workshop organised by the WCR, Ayaz highlighted the importance of financial stability in making Pakistan peaceful, while observing that the countries which rely on others for their needs fail to have an independent foreign policy.

He added that terrorism and sectarian rifts can be eliminated by following the constitution of Pakistan in letter and spirit.

“[The] whole world is against Pakistan, a vindication of which is the move to put the country in the FATF’s Grey List which would be detrimental to the prosperity of the country,” noted the CII head.

Peace would eventually transform into progress and financial stability which would portray Pakistan in a favourable light, he further said.

Yaseen Zafar also addressed the audience and highlighted the primary role of ‘Aalmi Majlis Adyan Pakistan’ in establishing peace in the country in collaboration with religious leaders and scholars. Now the students are being taken onboard for the same motive, he informed the audience.

Zafar urged the political leaders to promote a culture of tolerance and acceptability so that the burgeoning fanaticism could be capped.

On the occasion, Hafiz Muhammad Nauman, Executive Director, World Council of Religions-Pakistan, opined that according to a survey, as many as 56 percents of the Pakistanis followed their religious leaders noting that for a peaceful Pakistan, the role of religious leaders was crucial.

“There would be no conflicts if we hold healthy debates over core issues instead of different sects,” he observed.

The participants also listened to Ilyas Ghumman, Samia Raheel Qazi, Syed Mushahid Hussain, Qari Niaz Hussain Naqvi and MPA Waheed Gull who called upon the scholars to actively play their role for restoring law and order in the country.

The conference will continue on Wednesday (today), with prominent educationist and scholars apprising the audience of the challenges faced by Pakistan on religious fronts and the ways to solve them.