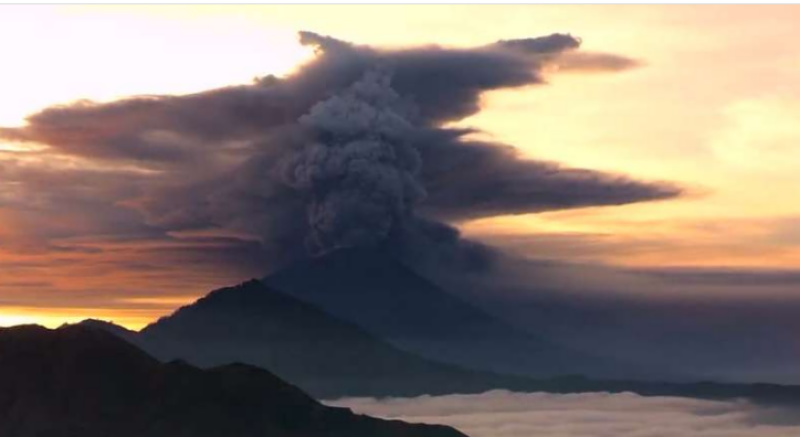 Denpasar, Indonesia (Reuters): Thousands flee as Indonesia closed the airport on the tourist island of Bali on Monday and ordered 100,000 residents living near a grumbling volcano spewing columns of ash to evacuate immediately, warning that the first major eruption in 54 years could be “imminent”.

The airport was closed for 24 hours from Monday morning, disrupting 445 flights and some 59,000 passengers, after Mount Agung, which killed hundreds of people in 1963, sent volcanic ash high into the sky, and officials said cancellations could be extended.

“Plumes of smoke are occasionally accompanied by explosive eruptions and the sound of weak blasts that can be heard up to 12 km (7 miles) from the peak,” the Disaster Mitigation Agency (BNPB) said in a statement after raising the alert from three to its highest level of four.

“The potential for a larger eruption is imminent,” it said, referring to a visible glow of magma at Mount Agung’s peak overnight, and warning residents to evacuate a danger zone at a radius of 8-10 km (5-6 miles).

Sutopo, a BNPB spokesman, said there had been no casualties so far and 40,000 people had left the area, but tens of thousands still needed to move.

Video footage shared by the agency showed volcanic mud flows (lahar) on the mountainside. Lahar carrying mud and large boulders can destroy houses, bridges and roads in its path.

Bali, famous for its surf, beaches and temples, attracted nearly 5 million visitors last year, and its airport serves as a transport hub for the chain of islands in Indonesia’s eastern archipelago.

But tourism has slumped in parts of Bali since September when Agung’s volcanic tremors began to increase and the alert level was raised to maximum before being lowered in October when seismic activity calmed.“I‘m really worried. Maybe I’ll go somewhere south that I think will be safe to avoid being trapped by the ashfall,” said Maria Becker, a German tourist staying in Amed, around 15 km (9 miles) from the volcano.

Indonesia’s Vulcanology and Geological Disaster Mitigation Centre (PVMBG), which is using drones, satellite imagery and other equipment, said predictions were difficult in the absence of instrumental recordings from the last eruption 54 years ago.

In 1963, an eruption of Agung killed more than 1,000 people and razed several villages by hurling out pyroclastic material, hot ash, lava and lahar.

Recordings now show the northeast area of Agung’s peak has swollen in recent weeks “indicating there is fairly strong pressure toward the surface”, PVMBG said.

It warned that if a similar eruption occurred, it could send rocks bigger than fist-size up to 8 km (5 miles) from the summit and volcanic gas to a distance of 10 km (6 miles) within three minutes.

Some analysis, however, suggests the threat should not be as great this time because “energy at Mount Agung’s magma chamber is not as big” and the ash column only around a quarter as high so far as the 20 km (12 miles) reached in 1963, Sutopo said.

Bali airport, about 60 km (37 miles) from the volcano, will be closed for 24 hours, its operator said.

Ten alternative airports have been prepared for airlines to divert inbound flights, including in neighboring provinces.

Virgin Australia Holdings Ltd said it was cancelling flights on Tuesday, while Jetstar was offering to exchange Bali bound tickets for other destinations.

Television footage showed hundreds of holidaymakers camped inside the airport terminal, some sleeping on their bags, others using mobile telephones.

“We have been here (in Bali) for three days we are about to leave today, but just found out our flights have been canceled. We have got no information because the gates, the check-ins, have been closed indefinitely,” said Carlo Oben from Los Angeles.

Cover-More, Australia’s biggest travel insurer, said on its website customers would only be covered if they had bought policies before the volcano alert was first issued on Sept. 18.

The main airport on Lombok, next to Bali, was closed after being open for much of the day, a spokesman said.

Airlines avoid flying when volcanic ash is present because it can damage engines and can clog fuel and cooling systems and hamper visibility.