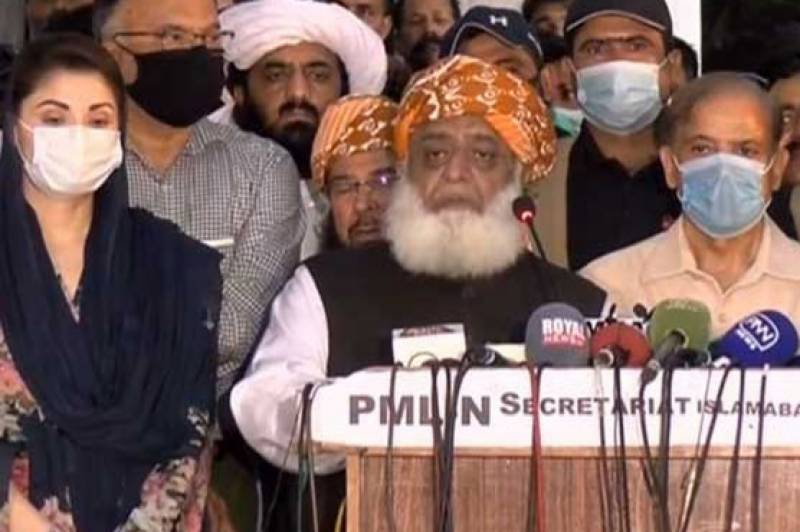 Addressing a press conference flanked by the leaders of the allied parties, PDM chief Maulana Fazlur Rehman announced that the alliance has rejected the government's unilateral electoral reforms ordinance, including the electronic voting machines (EVMs) and terms it as pre-poll rigging.

He said that the Election Commission of Pakistan (ECP), which is responsible for holding transparent elections, should call a meeting of all political parties to take a unanimous decision on electoral reforms.

The PDM chief said that during the meeting, the allied parties expressed concerns over the ongoing situation in the region.

Maulana Fazrlur Rehman said that the PDM demands thata joint session of the parliament be called to discuss the foreign and defence policies in light of the situation prevailing in the region and Afghanistan.

The PDM chief said the relevant officials overseeing the policies should brief the house over the developments in the Afghan peace process and other matters related to the process.

"Especially, the officials should inform the house on the speculations that Pakistan is offering airspaces to American planes," he said, adding the parliament should be taken into confidence on these matters.

Maulana Fazlur Rehman said that the PDM meeting strongly condemned the attack on journalists and expressed its solidarity with them.

He said that PDM plans to hold large protest rallies for mobilization of the public, with a rally on July 4 in Swat, July 29 in Karachi and a grand protest in Islamabad on August 14 to celebrate Independence Day.

“It will be an expression of solidarity with the people of Pakistan,” the PDM chief said.

Responding to a question regarding return of Pakistan Peoples Party (PPP) and the Awami National Party (ANP) to the PDM, Maulana Fazlur Rehman said that no discussion was held on this topic during today’s meeting.