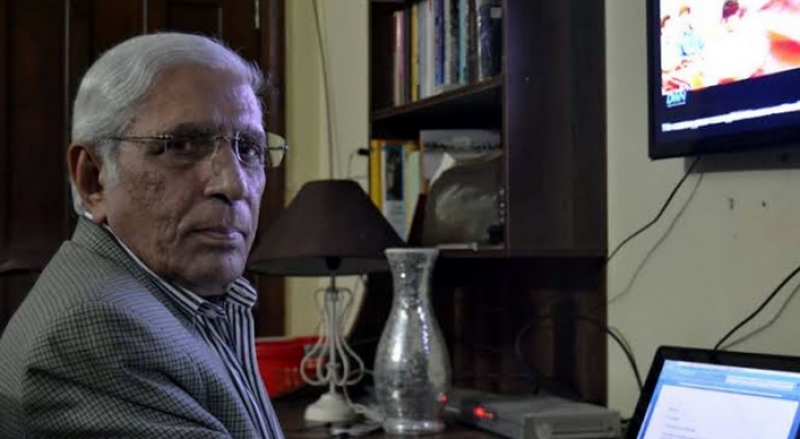 Islamabad (Web Desk): Senior journalist Muhammad Ziauddin passed away in Islamabad on Monday at the age of 83.

In his more than 60 years' long career, M Ziauddig had worked extensively for almost all major newspapers of Pakistan including The Muslim, Dawn, The News, and The Express Tribune.

Born in 1938 in the Indian city of Madras, Ziauddin along with his family migrated to East Pakistan (now Bangladesh) in 1952. He shifted to Pakistan in 1960 and remained here for the rest of his life.

Following the end of his splendid career, he continued writing mostly freelance for noted publications.

Among his other experience in the field, Ziauddin served as the assistant secretary general for the Pakistan Federal Union of Journalists and as the president of the South Asia Free Media Association from 2002 to 2006.

Following the news of his demise, several people including journalists, politicians and activists expressed their condolences and paid tribute to Ziauddin on Twitter.

SHOCKED: Family of M Ziauddin Sb confirmed he had passed away. MY Longtime colleague, friend, fellow. I hv years of memories about him, his greatness, humility, honesty, strength.He believed in himself and his trusted friends, NEVER CORRUPT. GOD PL RIP. WILL WRITE IN DETAIL SOON

Veteran and one of the most outstanding journalist of Pakistan M. Ziauddin Ahmad has passed away. He was an iconic figure and a guide for all the young journalists. May Allah give his family strength to bear the loss.

Sad news of passing away of Ziauddin Sb. Among the last of titans in journalism. A thorough professional he possessed grit, substance & character but never sought applause. The trophies & medals he won are intangible. Unlike the medals worn on chests they never gather dust. RIP

Just heard Mr Ziauddin former resident editor of Dawn, editor Express Tribune lost his battle for life. May his soul rest in peace. I will miss talking to him it was always a great learning experience

A former editor of Dawn, The News and Executive Editor of The Express Tribune - and a mentor and professional colleague, M Ziauddin sahib has passed away

Pakistani journalism has lost one of its finest in a generation

May Allah Bless him pic.twitter.com/lzupbxaAkH

My teacher, mentor, friend @MZiauddi passes away. He was an icon. Sad day for #Pakistani #journalism

Senior journalist Muhammad Ziauddin has passed away in Islamabad after prolonged illness. He was 83 years old. In his illustrious career spanning 60 years Ziauddin Saheb wrote extensively for all leading newspapers of Pakistan including @thenews_intl @dawn_com & others. pic.twitter.com/Y0E6svZtah

Ex-editor Dawn Islamabad @MuhammadZiauddi Sb is no more. One of the finest and upstanding journalists and among the pioneers of economic journalism in Pakistan. Always very kind to his juniors like us. Rest in Peace sir

Deeply saddened to hear of the passing of fearless veteran Journalist @MuhammadZiauddi who was an intellectual giant of journalist community. A role model for many in his profession & beyond, his demise ends an era of journalism of courage,ethics and values.May he rests in peace. pic.twitter.com/rt8LeE12iL

Waking up to the terrible news of @MuhammadZiauddi Sb having passed away. Gentle, dignified, man who was a professional through and through. May he rest in peace. Feels like we're losing all of our best.

Mohammad Ziauddin sb was an institution in himself. A man of principles, integrity and wisdom. He served journalism more than anything in his life. I was lucky to work under him. He taught me to keep emotions separate from the noble cause. Rest In Peace sir.#ziauddinupdate