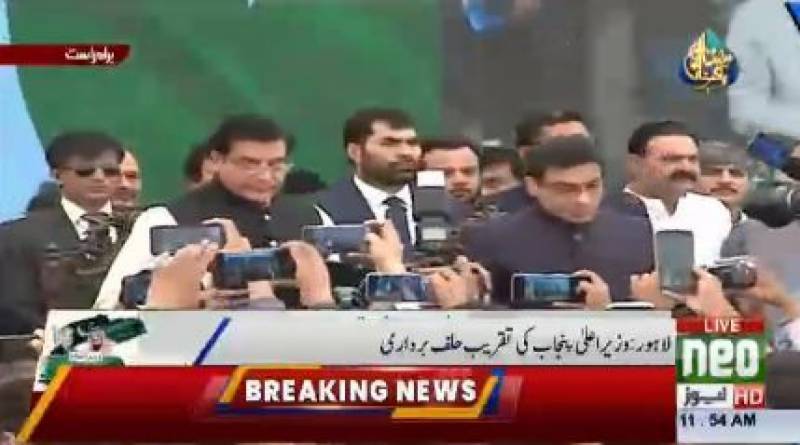 It is pertinent to mention that Justice Jawad Hassan of the LHC, in his ruling on Friday, directed Speaker NA to administer oath to the newly-elected chief minister at 11:3am on Saturday.

Earlier, LHC Chief Justice Muhammad Ameer Bhatti had passed orders twice. The first was to President Arif Alvi to nominate anyone for administering the oath to Hamza but the order was in vain. The second time, the LHC chief justice had advised the Punjab governor to ensure the swearing-in of Hamza, but the constitutional obligation was not followed.

It was for the third time when the PML-N leader moved the LHC over not being administered his oath.

This time, Hamza, in his petitioner, had requested the LHC to “nominate any person” for the administration of oath at the Punjab Governor House at a specified time and the coercive arm of the State should be set in motion for the implementation of the court orders.

On the other hand, Pakistan Tehreek-e-Insaf (PTI) on Saturday filed intra-court plea against the LHC ruling directing NA Speaker to administer oath to Hamza Shahbaz.

The petition, which was filed by 17 PTI lawmakers, argued that police was allowed to enter Punjab Assembly and PTI MPAs were encouraged to go against their party.

The petition further states that the court cannot interfere in parliamentary matters and LHC’s April 29 verdict is unconstitutional.

PTI prayed that the larger bench of the court nullify single bench’s verdict.

Meanwhile, Punjab Governor Umar Cheema dismissed former chief minister Usman Buzdar’s resignation, hours before PML-N's Hamza Shahbaz was to be sworn in as the new CM, after which the former chief executive of the province immediately summoned a cabinet meeting at the Punjab Assembly.

The Punjab governor wrote a letter to PA Speaker Chaudhry Pervez Elahi and stated that Buzdar’s resignation was dismissed on the basis of certain constitutional loopholes.

Hamza was elected as Punjab's chief minister on April 16. However, his oath-taking was deferred twice despite the LHC's directives for not delaying the matter any further.

The Punjab governor had refused to administer the oath terming Hazma’s election by the Punjab Assembly as unconstitutional.

Hamza Shehbaz had moved the LHC against the delay in oath taking process.