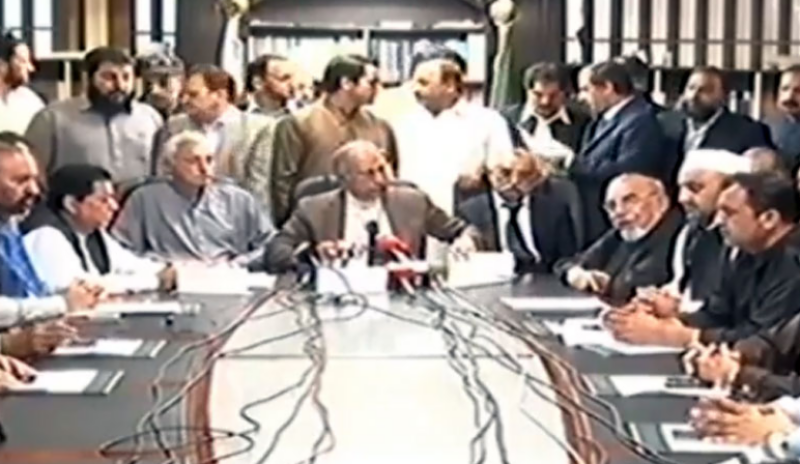 Islamabad (Staff report/Agencies): The traders on Wednesday called off countrywide shutter-down strike aftert reaching an eleven-point agreement with the government.

Adviser to the Prime Minister on Finance Dr Abdul Hafeez Sheikh, flanked by Federal Board of Revenue (FBR) Chairman Shabbar Zaidi and PTI stalwart Jahangir Tareen, announced the agreement at a press conference.

The following points were agreed between the government and the traders:

1 - The government will not launch any action against traders who are not buying and selling goods on the basis of their CNIC till January 31 of next year.

2 - Traders making a turnover of 100 million will give a turnover tax of 0.5 per cent, rather than the 1.5 per cent currently set by the government.

3 - Any trader making a profit of 100 million will not pay the withholding tax.

4 - Registration for the sales tax will be done if a trader’s yearly electricity bill is more than 1.2 million, rather than the Rs 600,000 currently set by the government.

5 - Turnover tax for low profit making sectors will be determined in consultation with a committee of traders. FBR will address the problems faced by the traders after consulting the committees that will be formed at the regional and central levels.

6 - Problems of the jewelers will be resolved on a priority basis with the help of the Jewelers Association.

8 - A special desk will be set up in the FBR’s headquarters in Islamabad to resolve the problems faced by the traders which will be led by a 20 or a 21 grade officer. While, monthly meetings will also be held with the representatives of the traders.

9 - A simple form will be formed for the registration and income tax filing for new traders.

10 - Shops smaller than 1000 square feet will be exempted from sales tax and any decision regarding the issue will be taken in consultation with the traders’ committee.

11 - Any decision regarding the registration of sales tax for retailers, involved in the whole sale business, will be done in consultation with the traders’ committee.

The strike call was given by various traders associations after the deadlock between the All Pakistan Anjuman-e-Tajran (APAT) and Federal Bureau of Revenue (FBR), traders across the country are observing a shutter down strike on Tuesday and Wednesday.