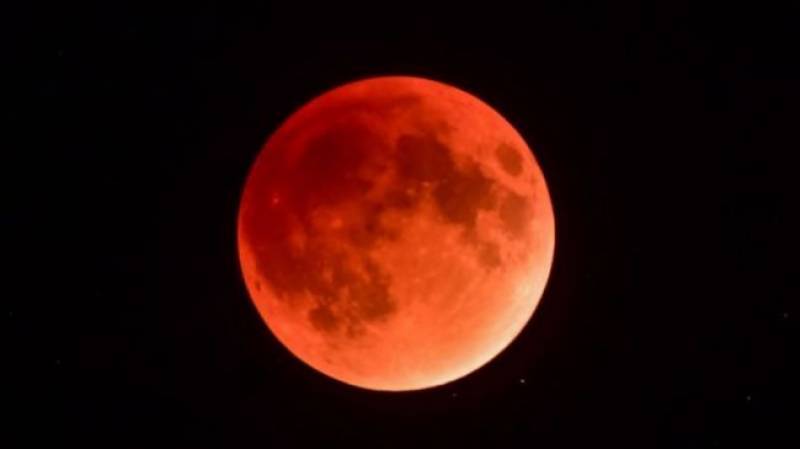 Lahore (Web Desk): The world on Wednesday is going to witness a rare and a spectacular view of ‘Super Blue Blood Moon’, after 1866 - at least a gap of 152 years.

The most prominent feature of this lunar eclipse is that it’s not only the full moon of the month but also will be 14 percent larger than normal moon, meanwhile moon will appear reddish for what it is called ‘Super Blue Blood Moon’.

Chief Pakistan Meteorological Department (PMD) Dr Ghulam Rasul said, “The moon can be seen from anywhere in Pakistan, depending on the weather conditions”.

He added, it is going to be a historical moment because it is a coincidence when blue moon, red moon and full lunar eclipse will take place at the same time and on the same date and this moon was last time seen in 1866.

The climax of lunar eclipse in Pakistan will be at 18:31 Pakistan Time (PST), Dr Rasul said and added it will be visible at the moonrise in the country.

“It is estimated that that the moon will be 34% brighter and 14% bigger than its usual size and light,” he maintained.

Meanwhile, according to the Climate Data Processing Centre at PMD, the penumbral eclipse will begin at 15:51 PST, partial eclipse at 16:48, followed by total eclipse at 17:52 and the greatest eclipse at 18:31 PST.

The experts are of the view, the Blood Moon appears when the moon passes west to east through the earth’s shadow.

The moon will appear as super-moon, with the perigee being on January 30. Moreover, it is going to be the first blue moon eclipse in 2018, and this is why many are calling it as ‘Super Blue Blood Moon’.

The moon will be visible in large parts of US, northeastern Europe, Russia, Asia, the Indian Ocean, the Pacific and Australia.