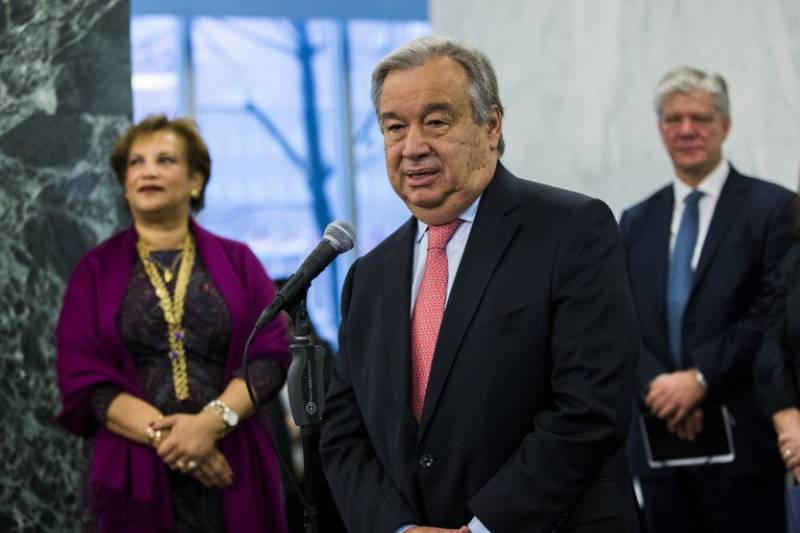 New York (Online): The new United Nations chief, Antonio Guterres, warned Tuesday that the world body faces hard and challenging times and asked for support of reforms to make it better able to deal with them.

Guterres, who succeeded Ban Ki-moon as secretary-general on January 1, addressed staff and diplomats about the need for an overhaul of the international organization before beginning his first day of work at UN headquarters in New York.

"I think it is useful to say there are no miracles," he said. "I am sure I am not a miracle maker."

The unanimous election of Guterres -- who fought for migrants rights as the UN High Commissioner for Refugees for a decade -- has energized UN diplomats who see him as a skilled politician who may be able to overcome the divisions crippling the 193-nation UN.

In his remarks to personnel, Guterres underscored the complex crises in the world that the UN must deal with to foster peace.

"We should have no illusions," he said. "We are facing very challenging times."

"We see everywhere in the world conflicts that multiply and are interlinked and have triggered this new phenomenon of global terrorism."

Guterres noted, in this context, "the generosity of the Turkish people... victim of a terrible terrorist attack" at a nightclub in Istanbul on New Year s Eve.

While the UN has eased the sufferings of people, "we still fail in the prevention of conflicts and conflict resolution," he said, in an implicit reference to the war in Syria.

"There is a lot of resistance in many parts of the world, a lot of skepticism about the role the UN can play," he added.

"We need to be able to recognize our shortcomings, our failures," the Portuguese former prime minister told hundreds of people gathered for his address.

He called for a strong engagement to change, reform and improve the international body and "get rid of the straightjacket of bureaucracy."

"The only way we can achieve our goals is to really work together as a team and serve the values enshrined in the Charter and that unite humanity," he said.

Asked by reporters whether he was concerned about US President-elect Donald Trump s criticism of the UN, Guterres said: "No. I m concerned with all the terrible problems we face in the world."

He cited wars, human rights violations and poverty. "I hope that we will all be able to come together to solve these problems."

Trump, in a tweet last week, denounced the UN as "just a club for people to get together, talk and have a good time."

In a New Year s message Sunday as he took the helm of the UN, Guterres said he wanted to make 2017 a year to "put peace first."