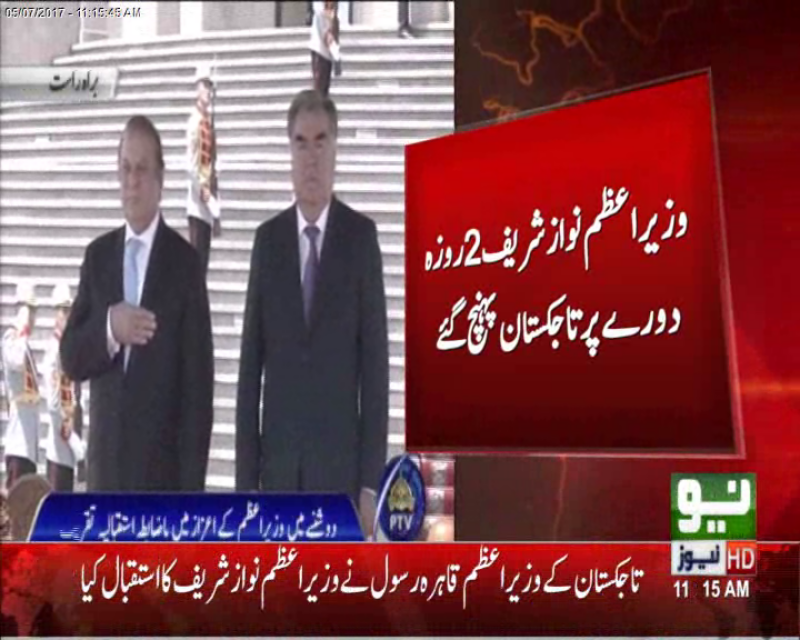 The delegation also includes officials of the National Highway Authority.

According to the press release, the visit to Tajikistan is reflective of the premier's vision to strengthen Pakistan's relations with neighbouring and regional countries and further increase regional connectivity.

At Dushanbe, the leaders of the two countries will discuss bilateral relations, economic cooperation, including trade and investment, energy cooperation and regional connectivity.

They will also exchange views on regional and international issues of mutual interest, with particular attention to Pakistan's policy of a peaceful neighbourhood.

A joint declaration entitled "Road towards strategic partnership for regional solidarity" will be signed during the visit.

A meeting of Joint Business Council (JBC) will also coincide with the visit of the Prime Minister. The JBC will consider steps to enhance bilateral trade and commercial ties.

Pakistan and Tajikistan enjoy close and cooperative relations, which are underpinned by commonalities of history, culture and faith. These ties are characterised by mutual respect, shared perceptions and common desire to promote peace, stability and development in the region.

The two countries also share common views on major regional and international issues and cooperate closely in the regional and multilateral forums.

Pakistan was among the first few countries that recognised the independence of Tajikistan, established diplomatic relations and opened a resident mission in Dushanbe.

A Trilateral Summit between Pakistan, Afghanistan and Tajikistan is also scheduled to be held on the sidelines of the visit for discussions on regional topics of mutual interest.