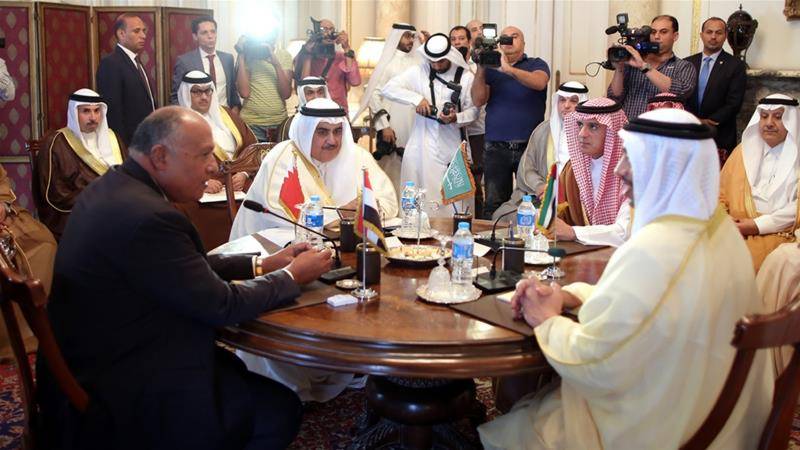 In a joint statement released late on Thursday, the Saudi-led group also blamed Qatar for "continuing to seek to sabotage and undermine the security and stability in the Gulf region".

"All political, economic and legal measures will be taken in the manner and at the time deemed appropriate to preserve the four countries' rights, security and stability," the statement said.

On Monday, Qatar delivered its response to a list of 13 demands from Saudi Arabia and three other Arab countries that cut have ties with it and imposed a land, air and sea embargo amid a major diplomatic crisis.

Qatari Foreign Minister Sheikh Mohammed bin Abdulrahman Al Thani said the country will do "whatever it takes to protect our people", as he accused the Gulf states of trying to undermine his nation's sovereignty.

The group severed air, sea and ground links with Qatar, cutting off vital routes for imports including food.

They also ordered Qatari citizens to leave their territories and took various steps against Qatari firms and financial institutions.

On June 22, they issued a 13-point list of demands, including the shutdown of Al Jazeera, as a prerequisite to lift the sanctions, which include the closure of Qatar's only land border and suspension of all flights to and from the country.

Saudi Arabia and its allies now consider the demands, sent via mediator Kuwait, "null and void" as the Qatari government had "thwarted all diplomatic efforts to resolve the crisis", the statement added.

Earlier on Thursday, the US state department warned that the Gulf crisis is at an impasse and could potentially drag on for weeks or even months.

The US believes the crisis could "possibly even intensify", Heather Nauert, the spokesperson for the State Department, said.

Nauert did not specify what type of escalation the US fears, but she said Secretary of State Rex Tillerson remains in close contact with the countries involved.

Later on Thursday, a State Department statement said Tillerson will be travelling to Kuwait on Monday to discuss efforts to resolve the Gulf crisis.