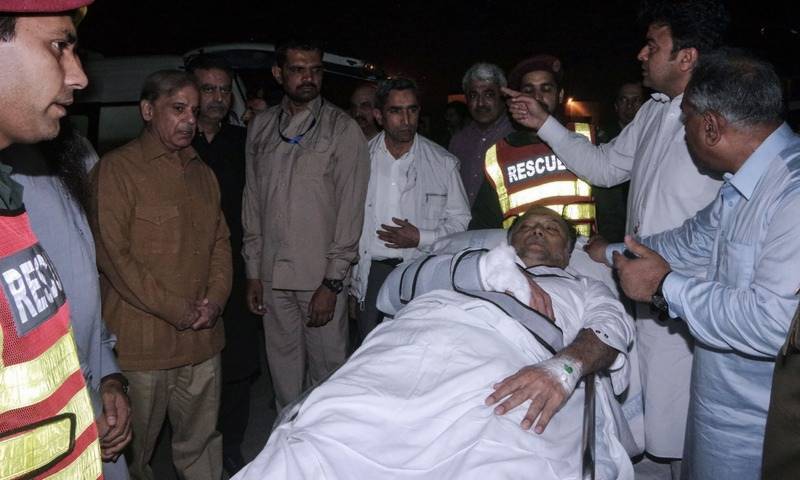 Lahore (Staff Report): Surgeons have decided not to remove the bullet that entered Interior Minister Ahsan Iqbal’s abdomen after hitting his arm.

The minister underwent two operations — one aimed at removing the bullet from Iqbal’s lower torso and the other to mend his broken elbow bone.

However, the doctors said the bullet that entered minister’s abdomen was not harmful to him anymore and extracting it from the body at this time could prove risky.

The interior minister, who belongs to the ruling Pakistan Muslim League (PML-N), suffered a bullet wound in his right arm when an armed attacker opened fire on him in Kanjrur area of Shakargarh.

Ahmed Iqbal, the minister’s sonis has said that now his father is out of danger. However, the minister will be kept in the Intensive Care Unit (ICU) for next 24 hours.

On the other hand, a man who was arrested following assassination attempt on Interior Minister Ahsan Iqbal has showed his affiliation with Tahrik-e-Labbaik, a religious turned political party, led by Khadam Hussain Rizvi.

A preliminary report sent by deputy commissioner of Narowal to Punjab chief secretary revealed the attacker who fired shots at the minister has “showed his affiliation with Tahrik-e-Labbaik, who staged the violent protests against the government following amendment to Khatam-e-Nabuwwat Declaration in Election Act, 2017.

The report further said, “…lqbal finished his corner meeting at village Kanjroor at about 6:00 pm today [Sunday] evening when a man took advantage of the rush gathered around the minister and fired a bullet with 30 bore pistol which passed his right arm and went straight into groin area”.

It added, “The elite force incapacitated that person immediately barring him from further firing and arrested along with the weapon. The man identified himself as Abid Hussain s/o Muhammad Hussain by caste Gujjar resident of Village Viram tehsil Sakargarh district Narowal”.