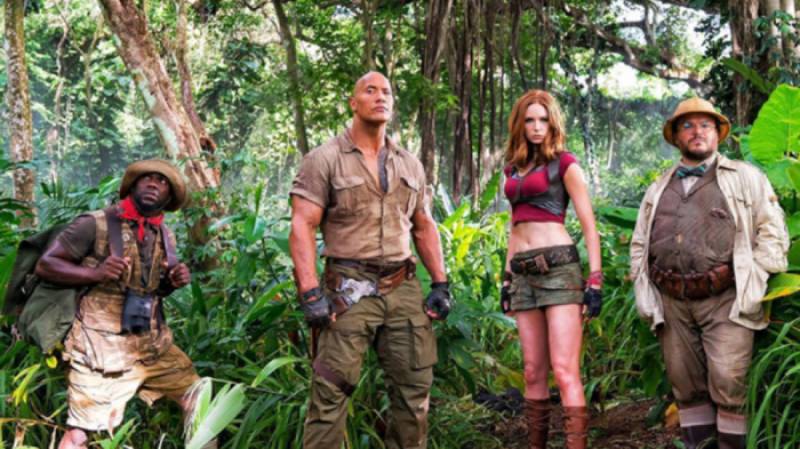 Los Angeles (Variety.com): Sony’s “Jumanji: Welcome to the Jungle” handily won the first box office weekend of 2018 over the launch of “Insidious: The Last Key” and “Star Wars: The Last Jedi” with $36 million at 3,801 North American locations.

The fourth installment of the “Insidious” horror franchise scared up a surprisingly strong $29.3 million at 3,116 sites for Universal. Disney-Lucasfilm’s “The Last Jedi” followed in third with a 55% decline to $23.6 million at 4,232 venues for a 24-day total of $572.5 million -- the sixth-largest of all-time.

Fox’s fourth weekend of animated comedy “Ferdinand” finished sixth with $7.7 million at 3,156 venues, followed by Jessica Chastain’s “Molly’s Game” from STXfilms, which brought in $7 million after expanding to 1,608 sites from 271. Chastain received a Golden Globe nomination for best actress in a drama for her work in the film -- whether or not she wins will be determined Sunday. The film also received a Producers Guild Award nomination on Friday for best film, a day after Aaron Sorkin’s script received a Writers Guild nom for adapted screenplay.

The “Jumanji” sequel has taken in $244.4 million in its first 19 days domestically. It’s the first weekend box office win for “Jumanji” -- which has gone past “Justice League” as the ninth-largest domestic grosser among 2017 titles. “Jumanji: Welcome to the Jungle” is also topping the $500 million mark worldwide.

Dwayne Johnson, Kevin Hart, Jack Black, and Karen Gillan star in “Jumanji: Welcome to the Jungle,” a sequel to Robin Williams’ original, which was a 1995 hit with $262 million worldwide. “Welcome to the Jungle” follows four high schoolers in detention who wind up as video game characters facing an array of challenges.

“Insidious: The Last Key” came in far above expectations, which had been in the $16 million to $19 million range. It’s the latest horror title from Blumhouse Productions, which delivered low-cost horror hits last year for Universal with “Split,” “Get Out,” and “Happy Death Day.” The franchise dates back to 2010 with “Insidious,” followed by “Insidious: Chapter 2” in 2013 and “Insidious: Chapter 3” in 2015 -- which have grossed a collective $357 million worldwide.

Lin Shaye, who has starred in all three films, returns in “Insidious: The Last Key” as a parapsychologist whose haunted childhood comes to threaten her family and home in a follow-up to the events in “Insidious: Chapter 3.” It’s produced by “Insidious” regulars Jason Blum, Oren Peli, and co-creator James Wan and by Sony Pictures (through Stage 6 Films) with Blumhouse. Universal is the U.S. theatrical distributor with Sony releasing in the rest of the world.

“2018 is off to a rollicking start with ‘Jumanji‘s’ unexpected strength boosting the overall marketplace nearly 20% ahead of the comparable weekend a year ago as the box office new year gives the industry cause to celebrate with an incredibly diverse lineup of titles driving patrons to theaters and a red hot awards season in full swing,” noted Paul Dergarabedian, senior media analyst with comScore. “Two years ago was not even as strong with a ‘Force Awakens’ driven marketplace ringing up sales of $159.1 million for the same weekend in 2016.”