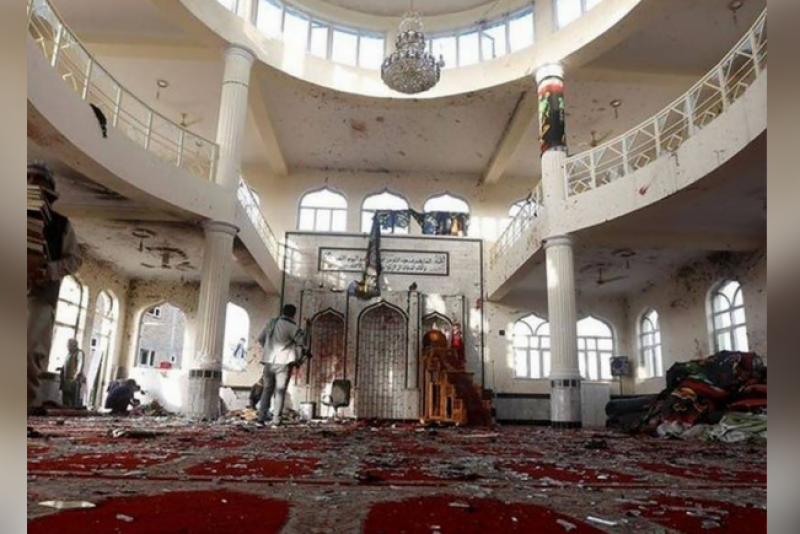 Kabul (Web Desk): At least 50 people were killed and several others injured in a deadly explosion in a mosque in Afghanistan's Kunduz city Friday.

A medical source at the Kunduz Provincial Hospital said that 35 dead and more than 50 wounded had been taken there, while a worker at a Doctors Without Borders (MSF) hospital reported 15 dead and scores more wounded.

"This afternoon, an explosion took place in a mosque of our Shia compatriots ... as a result of which a number of our compatriots were martyred and wounded," Taliban spokesman Zabihullah Mujahid said on Twitter, adding that a special unit was arriving at the scene to investigate.

There was no immediate claim of responsibility for the attack, but the Islamic State group, arch-rival of the Taliban, has claimed similar recent atrocities.

Graphic images shared on social media, which could not immediately be verified, showed several bloodied bodies lying on the floor. Pictures showed plumes of smoke rising into the air over Kunduz.

Another video showed men shepherding people, including women and children, away from the scene. Frightened crowds thronged the streets.

Kunduz's location makes it a key transit point for economic and trade exchanges with Tajikistan.

It was the scene of fierce battles as the Taliban fought their way back into power this year.

Often targeted by extremists, Shia Muslims have suffered some of Afghanistan's most violent assaults, with rallies bombed, hospitals targeted and commuters ambushed.

Shias make up roughly 20 per cent of the Afghan population. Many of them are Hazara, an ethnic group that has been heavily persecuted in Afghanistan for decades.