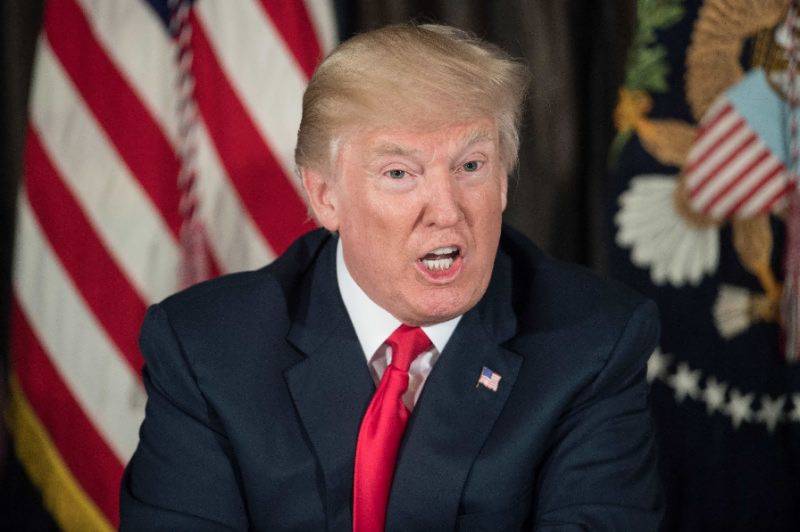 Washington, United States (Online): The United States on Wednesday warned North Korea that the pursuit of its nuclear drive could lead to the collapse of Kim Jong-Un's regime, as President Donald Trump brandished America's nuclear might as a powerful deterrent.

The further escalation in Washington's war of words with Pyongyang came a day after Trump stunned the world with a bold-faced message to Kim, saying his country faced "fire and fury like the world has never seen."

Trump's comments triggered expressions of concern from China and from US allies, and stock markets and the dollar slipped as investors seek safe-haven investments.

Early Thursday North Korea reacted by saying Trump was not a reasonable man. It also elaborated on a threat to attack the tiny US Pacific territory of Guam.

The official KCNA news service quoted General Kim Rak Gyom of the Korean People's Army as saying, "Sound dialogue is not possible with such a guy bereft of reason and only absolute force can work on him."

The statement said the army would complete by mid-August a plan for the Guam attack, which would involve four rockets flying over Japan, and submit it to Kim Jong-Un for consideration as a "crucial warning to the US."

US Defense Secretary Jim Mattis, who has often emphasized the devastating costs any conflict with North Korea could have, delivered a statement underscoring his boss's language.

Mattis said North Korea must stop isolating itself and "stand down" in its pursuit of nuclear weapons, and Pyongyang "should cease any consideration of actions that would lead to the end of its regime and the destruction of its people."

The Pentagon chief also said North Korea's nascent missile capabilities were "grossly overmatched" by those of the US, and that Pyongyang would lose in any arms race or conflict.

Trump earlier boasted on Twitter that America's nuclear arsenal was "far stronger and more powerful than ever before," after North Korea said it was considering a missile strike near the tiny US Pacific territory of Guam.

My first order as President was to renovate and modernize our nuclear arsenal. It is now far stronger and more powerful than ever before....

"Hopefully we will never have to use this power, but there will never be a time that we are not the most powerful nation in the world!" Trump tweeted.

...Hopefully we will never have to use this power, but there will never be a time that we are not the most powerful nation in the world!

Amid reports that Trump's comments had taken his inner circle by surprise, White House spokeswoman Sarah Huckabee Sanders said the National Security Council and other officials knew the "president was going to respond... with a strong message in no uncertain terms."

Still, Trump's tone was at odds with that of Secretary of State Rex Tillerson, who said he did not believe "there is any imminent threat" to Guam or other US targets, and expressed hope that diplomatic pressure would prevail in the crisis.

State Department spokeswoman Heather Nauert the Trump administration was all on "the same page."

"The president is sending a strong message to North Korea in the kind of language that North Korea understands," she said.

Trump's language has become increasingly hard-edged since Pyongyang carried out a pair of successful intercontinental ballistic missile tests (ICBM) in July, which put the US mainland in range for the first time.

Pyongyang's KCNA state news agency reported Wednesday that plans were being drawn up for missile strikes against Guam that could be put into action at "any moment" after Kim gave the order.

Tillerson, who refueled in Guam while flying home from Southeast Asia, said Trump was determined to send an unequivocal message to Kim.

"Because he doesn't seem to understand diplomatic language," he said.

The island's governor Eddie Calvo reassured residents there was currently no threat to the territory, which has a total population of more than 160,000 and houses two US military installations.

In the capital Hagatna, islanders kept their cool.

"It's not like there's anything we can do anyway. This is a small island. There's nowhere to run to," resident James Cruz said AFP.

Joseph DeTrani, a former special envoy for stalled "six-party" talks aimed at reining in Pyongyang's nuclear program, told AFP it was vital to get back to the negotiating table.

"The possibility of miscalculation or stumbling into something that would be catastrophic is real," he told AFP.

Experts have long differed over the North's exact capabilities but all agree it has made rapid progress under Kim.