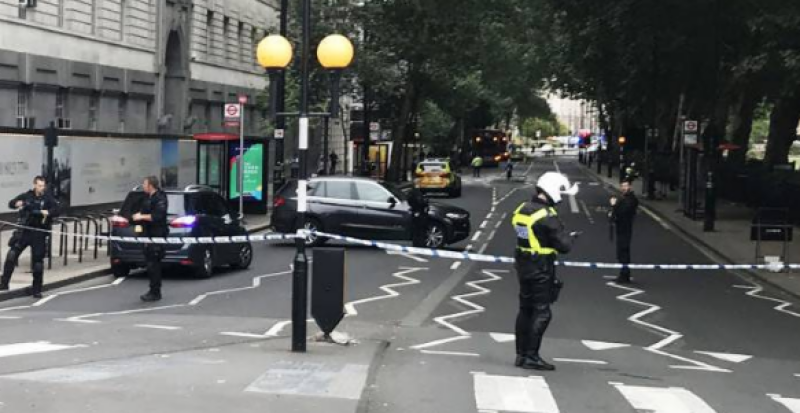 London (Agencies): A man has been arrested and a number of people have been injured after a car collided with security barriers outside Britain's Houses of Parliament in London.

"The male driver of the car was detained by officers at the scene. A number of pedestrians have been injured. Officers remain at the scene. We will issue further info when we have it," London's police force said in a statement on Twitter.

Police said they could not immediately say whether it was a terrorism-related incident or not.

"We're still trying to piece it together," a spokeswoman said.

Parliament Square has been closed and the streets around Parliament Square, Millbank and Victoria Tower Gardens have been cordoned off as dozens of armed police swooped on the scene.

Eyewitness Ewalina Ochab told the Press Association: "I think it looked intentional - the car drove at speed and towards the barriers."

"I was walking on the other side (of the road). I heard some noise and someone screamed. I turned around and I saw a silver car driving very fast close to the railings, maybe even on the pavement."

"The person driving did not go out" of the vehicle, she said.

The car did not appear to have a front registration plate when it crashed, she added.

Members of the public and the media have been moved back further from the area as police put up a "Terrorism Act cordon", according to an officer at the scene.

The cordon has been extended past the Cenotaph on Whitehall - a five-minute walk from the scene at Old Palace Yard.

In March 2017, Khalid Masood, 52, killed four people on nearby Westminster Bridge before he stabbed to death an unarmed police officer in the grounds of parliament. He was shot dead at the scene.

It was the first of five attacks on Britain last year which police blamed on terrorism.