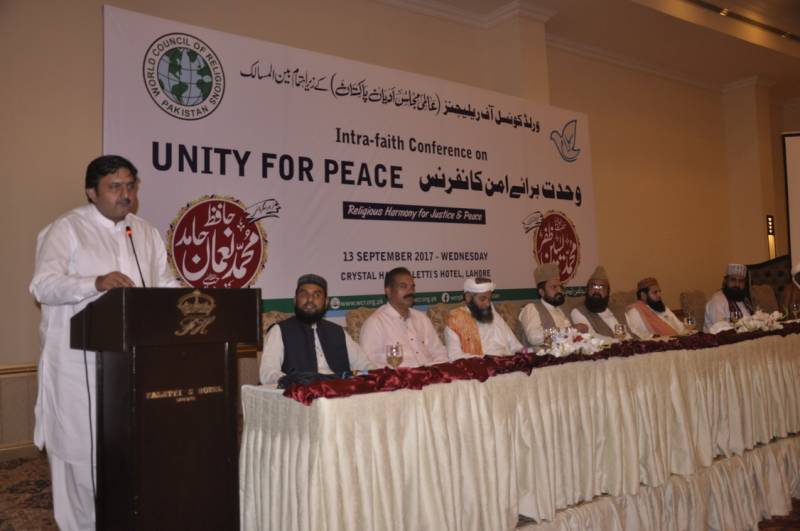 Lahore (PR): A peace conference, held under the aegis of World Council of Religion Wednesday, emphasised the need to eliminate sectarian violence and maintain peace during Muharram-ul-Haram.

The council organised a moot with a title “Unity for Peace Conference” at a local hotel in Lahore, which was attended by government ministers and religious figures.

The council organised a moot with a title “Unity for Peace Conference” at a local hotel in Lahore, which was attended by government ministers and religious figures.

Leaders from all the sects including Brelvi, Deobandi, Ahl-e-Hadith and Shia, and other scholars attended the conference.

Malik Ahmad Khan said on the occasion that maintaining peace during Muharram was a shared responsibility. He urged all scholars to unite for Pakistan by leaving all the differences behind.

“Establishing peace is among top priorities of the government so that all segments of the society could feel them safe in the country,” he added.

Provincial Minister for Excise and Taxation Mian Mujtaba Shuja-ur-Rehman, addressing the conference, highlighted that not intersect conflicts but terrorism is the real problem this country is facing.

Stressing harmony among the followers of all the religions and sects in the country, he made an appeal to the masses not to change their faith and force others to change theirs. “Social media is helping the negative elements promote hate-mongering,” the minister said while informing that the government would soon introduce effective laws to counter this issue. Punjab Schools Education Minister Rana Mashhood on the occasion revealed the government was about to bring major changes in curriculum to eliminate intolerance – starting from the most basic level. “The government will organise a grand conference on interfaith harmony ahead of Muharram that will see participation from all religions and sects the province,” Mashhood announced.

Hafiz Muhammad Nouman, Executive Director of WCR-Pakistan, said that the month of Muharram is for all Muslims no matter which group they belong to; therefore, respect the sanctity of this month is binding for all.

“Law and order is not a regional but a global issue which is most affecting the common man,” he highlighted and asserted that no religion or sect permit violence and unrest. He called for discouraging sectarianism at all levels to make Pakistan a peaceful country in the world.