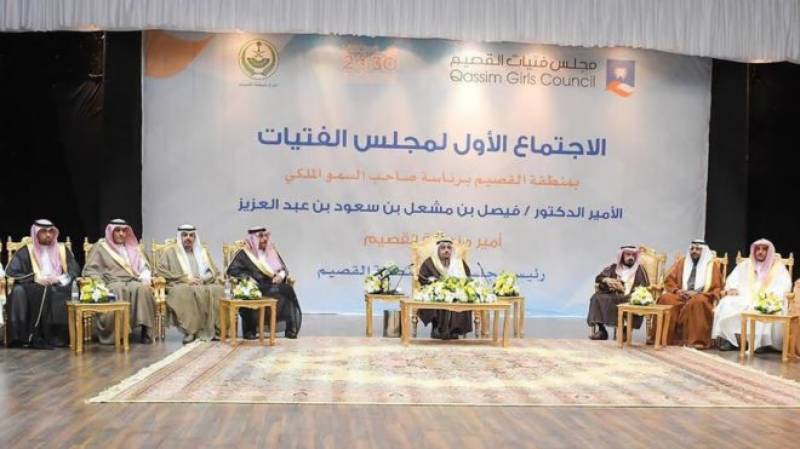 Riyadh (Web Desk): Saudi Arabia decided to formulate a girls’ council, it was an encouraging initiative for a country famous for depriving women from any public platform in life.

But worth noticing thing at inaugural girls' council in al-Qassim province was that Saudi Arabia totally ignored one thing: the women that they were actually meant to show off.

Released pictures of the first Qassim Girls Council meeting showed 13 men on stage, and not a single female.

The women were apparently in another room, linked via video.

The pictures of the event are facing criticism on social media. The Saudi launch was led by Prince Faisal bin Mishal bin Saud, the province's governor, who said he was proud of the conference and it was the first of its kind in the kingdom.

Prince Faisal bin Mishal bin Saud said, "In the Qassim region, we consider women as sisters to men, and we feel it our responsibility to provide them with more and more opportunities that will serve the work of women and girls".

Actually the girls' council was chaired by Princess Abir bint Salman, his wife, who was not in the photograph.

Despite a strict state policy of gender segregation between unrelated men and women is meticulously enforced, in Saudi Arabia. But the country may be moving toward loosening some of its rules as part of its Vision 2030 program. Its goals included increasing women's participation in the workforce from 22% to 30%.

At the launch of the girls' council, Prince Faisal said in his speech, women make up half of society, although looking at that picture, you would not know it.

The male-dominated photos of the girls’ council have been circulating widely on social media, after the meeting took place.

It has been compared to another viral hit - an image of US President Donald Trump, surrounded by men, signing an abortion policy in January.