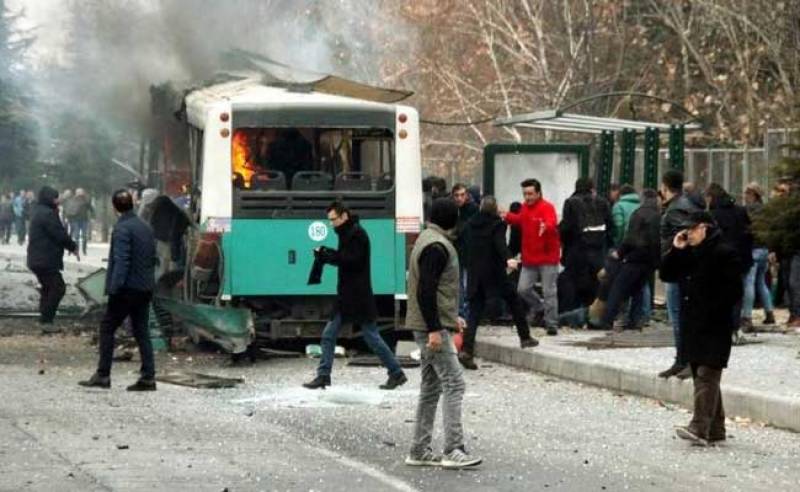 The army officers conformed that civilians may also have been injured during the incident.

Besides a number of causalities initial television pictures showed that the bus had been reduced to a ablaze wreck by the impact of the blast.

Earlier, before a week 44 people were killed on December 10 in a double bombing in Istanbul after a football match. The attack was claimed by Kurdish militants.

During a televised comments Deputy Prime Minister Veysi Kaynak alleged that the attack in Kayseri was "unfortunately similar" to last weekend's strikes in Istanbul.

He said, "Unfortunately we have people wounded, whether there are fatalities... will be announced later."

According to a news agency, the blast took place opposite the Erciyes University in the city.

Turkish media reported that there could be fatalities as a result of the blast.

The bus was owned by the municipal transport authorities in Kayersi but was transporting Turkish soldiers who had taken permission to go to a local market for the day, media revealed.

Turkish President Recep Tayyip Erdogan has been informed of the attack by the chief of staff General Hulusi Akar, Anadolu added.

The bomb placed in a car went off as the bus was driving by, the Dogan news agency said.

Although Kayersi is a key industrial hub and one of the main cities of central Turkey usually is seen as a peaceful area.

The double bombing, of last week, in Istanbul which targeted police after a match of the Besiktas football club was claimed by the Kurdistan Freedom Falcons (TAK) seen as a radical offshoot of the PKK.

Erdogan provoked a sharp response against the attack in Istanbul and vowed Ankara would "fight the scourge of terrorism right to the end".

"They should know that they will not get away with it ... They will pay a heavier price."