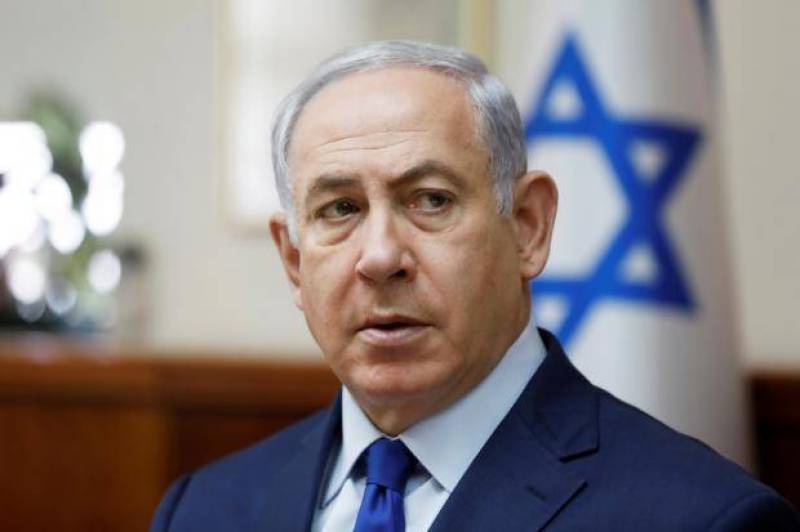 Munich (Reuters) - Prime Minister Benjamin Netanyahu said on Sunday that Israel could act against Iran itself, not just its allies in the Middle East, after border incidents in Syria brought the Middle East foes closer to direct confrontation.

Iran mocked Netanyahu’s tough words, saying Israel’s reputation for “invincibility” had crumbled after one of its jets was shot down following a bombing run in Syria.

In his first address to the annual Munich Security Conference, which draws security and defense officials and diplomats from across Europe and the United States, Netanyahu held up a piece of what he said was an Iranian drone that flew into Israeli airspace this month.

“Israel will not allow the regime to put a noose of terror around our neck,” he said. “We will act if necessary not just against Iran’s proxies but against Iran itself.”

For his part, Iran’s Foreign Minister, Mohammad Javad Zarif, called Netanyahu’s presentation “a cartoonish circus, which does not even deserve a response”.

“What has happened in the past several days is the so-called invincibility (of Israel) has crumbled,” Zarif, who addressed the conference hours after Netanyahu, said, referring to the downing of the Israeli F-16, which crashed in northern Israel after a strike on Syrian air defenses.

“Once the Syrians have the guts to down one of its planes it’s as if a disaster has happened,” Zarif said, accusing Israel of using “aggression as a policy against its neighbors” by regularly carrying out incursions into Syria and Lebanon.

Netanyahu said that as the Islamic State militant group has lost ground, Iran and its allies were surging into territory, “trying to establish this continuous empire surrounding the Middle East from the south in Yemen but also trying to create a land bridge from Iran to Iraq, Syria, Lebanon and Gaza.”

The tough words on both sides at the international event come as Israel is increasingly seeking to cooperate with Sunni Arab states that share its worries about Shi‘ite Iran. For months, Netanyahu has touted what he describes as unprecedented levels of behind-the-scenes cooperation.

“The fact that we have this newfound relationship with the Arab countries - something that ... I would not have imagined in my lifetime - this is not what they call a spin,” Netanyahu said, during a question and answer session after his speech.