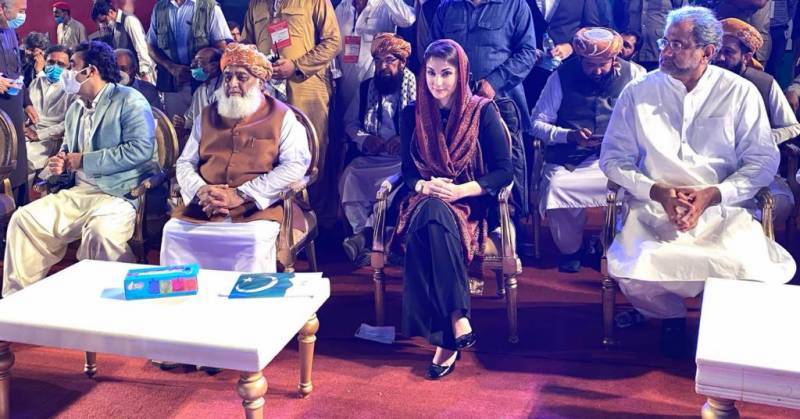 “We pay homage to the victims of the Karsaz tragedy on its 13th anniversary,” said PPP chairperson Bilawal Bhutto Zardari in his opening remarks.

Bilawal said that soon after the Karsaz carnage, Benazir Bhutto visited the hospital and stood firm and resolute and comforted those injured.

PPP chairman said that this pain and sorrow is one that will remain a life time. But this pain must be turned to strength just like the path PPP took after the "political murder" of Zulfiqar Bhutto.

Addressing the rally, PML-N vice-president Maryam Nawaz thanked the PPP leadership and people of Karachi for according her a warm welcome.

The PML-N vice-president says that she did not like to respond to the premier's comments as “it is below my dignity”.

However, Maryam said that she couldn't resist responding to the premier's statement where he had mockingly referred to her as a "nani (maternal grandmother)".

"Nani is the mother of the mother; you have disrespected this wonderful, beautiful relation," Maryam said.

Maryam Nawaz reached the Quaid-e-Azam’s mausoleum and offered fateha before she made her way to the venue of jalsa.

In a goodwill gesture, the PML-N vice president was welcomed by the PPP to large panaflexes of her and her father's, PML-N supremo Nawaz Sharif, pictures along the route of her rally.

A day earlier, commenting on the speech given by Nawaz during the PDM rally in Gujranwala, Prime Minister Khan said the PML-N leader was using inappropriate "language" against the army and ISI chiefs at a time when Pakistani soldiers were constantly sacrificing their lives for the nation. “The former premier Nawaz Sharif became the Punjab’ chief minister by “polishing General Zia’s shoes,” the PM added.

“Now I will bring back former premier Nawaz Sharif and put him in public jail and in future no protection order of anyone including Shahbaz Sharif will be issued.”

The PM said that it is important for them to understand their position and the importance of their work. "The volunteer force has a high stature in society, because you have to protect the rights of our citizens. This is a big role in a democracy: Tigers, you have a big role. Pakistanis are a nation who stand for their country," he maintained.