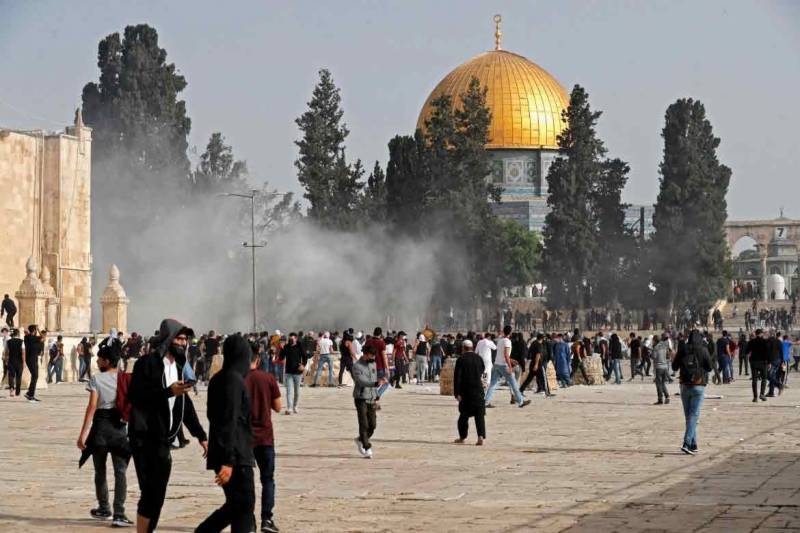 At noon, thousands of Palestinians gathered in the tree-lined compound surrounding the mosque for Friday prayers. Many stayed on to demonstrate in support of Palestinians in the Gaza Strip, cheering and waving Palestinian flags.

Police raids of the compound and violence against Palestinians during the holy month of Ramazan sparked the violence between Israel and Gaza’s rulers Hamas, who after 11 days of fighting agreed to a truce early on Friday.

Israel and Hamas announced a ceasefire that came into force early Friday to end 11 days of fighting in the Gaza Strip.

The ceasefire brokered by Egypt, that also included Gaza s second-most powerful armed group, Islamic Jihad, was agreed following mounting international pressure to stem the bloodshed which erupted on May 10.

A statement from Israeli Prime Minister Benjamin Netanyahu’s office said the security cabinet “unanimously accepted the recommendations to accept an Egyptian initiative for an unconditional ceasefire.

Palestinian groups Hamas and Islamic Jihad also confirmed the ceasefire in a statement, saying it would come into force this morning.

“This is the euphoria of victory,” said Khalil al-Hayya, a senior Hamas figure, in front of a crowd of thousands of Palestinians who had gathered in the streets to celebrate.

Welcoming the deal in his televised address, US President Joe Biden said both sides agreed the truce would begin immediately.

“I believe we have a genuine opportunity to make progress and I’m committed to working toward it,” Biden said at the White House, hailing Egypt’s role in brokering the agreement.

Tensions flare up as Israeli police clear Al-Aqsa worshippers for ...