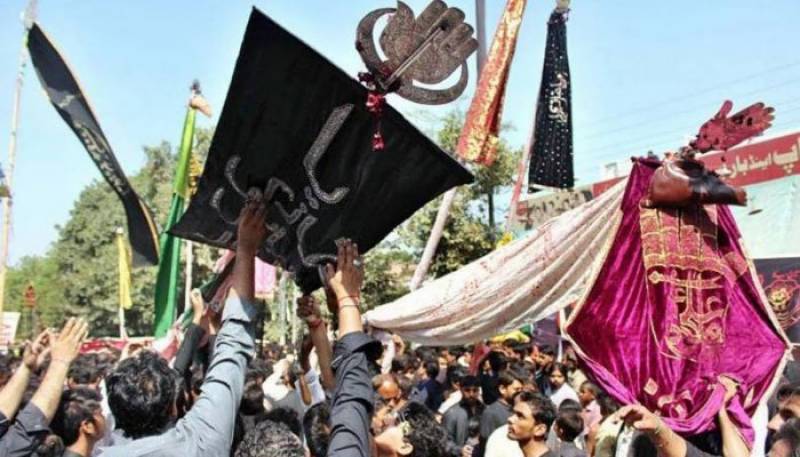 Islamabad (Staff Report/Agencies): Youm-e-Ashur, the tenth of Muharram-ul-Haram, was observed across the country on Friday with due solemnity to pay homage to the supreme sacrifices rendered by Hazrat Imam Hussain (R.A) and his 72 devoted companions in Karbala.

Alam, Zuljinah and Taazia processions were taken out in all cities and towns of the country. Ulema and Zakireen highlighted the teachings of Hazrat Imam Hussain (R.A.) and various aspects of Karbla tragedy.

Elaborate arrangements were made to ensure security of mourning processions and majalis. Police and other law enforcement agencies were deployed to ensure law and order situation.

In Lahore, Majalis were planned while processions of 10th Muharram-ul-Haram were taken out from different parts of the city.

Around midnight(early hours of Youm-e-Ashur), the main process of 10th Muharram-ul-Haram was taken out from Nisar Haveli inside Mochi Gate which concluded at Karbala Gaamay Shah on Friday evening after passing through its traditional route inside the Lahore Walled City.

Thousands of police personnel and other law enforcement departments were deputed on routes of all processions to avoid any untoward incident while CCTV cameras were installed on the routes of processions especially the main processions.

Meanwhile, a Monitoring Cell was functional at IG Office Lahore to monitor the Muharram-ul-Haram processions.

Similar processions were also taken in other cities across the province.

In Rawalpindi, the central procession of Ashura emerged from Colonel Maqbool Imambargah which after passing through its traditional route culminated at the Qadeemi Imambargah.

In Sindh, main Muharram procession was taken out from Nishtar park in Karachi which culminated at Imam Bargah Hussania Irania at Kharadar in the evening.

Meanwhile, Sindh Chief Minister Syed Murad Ali Shah visited the route of main mourning procession in sadder and MA Jinnah road in Karachi and inspected security arrangements. He met with organizers of the procession and directed officials concerned to provide all facilities.

According to administration, huge contingents of police were deployed on the routes of processions and around imambargahs to avert any untoward incident.

In Khyber Pakhtunkhwa, the main Alam and Zuljinnah procession of 10th Muhrram was taken out from Imam Bargah Alamdar-e Karbala Qissa Khawani Bazaar in Peshawar after Juma prayer. Mobile phone services were suspended in provincial metropolis due to security reasons. Similarly, Alam and Zuljinnah processions were taken out in Kohat, Bannu, Hangu, Lakki Marwat, Parachinar, D.I.Khan and other cities and towns of the Khyber Pakhtunkhwa.

Tight security measures were taken to ensure peaceful atmosphere on the occasion of Youm-e-Ashur.

In Balochistan, Small and big Alam, Zuljinah and Taazia processions were taken out from different parts of main cities in the province.

In Quetta, the main procession of Alam, Tazia and Zuljinnah was taken out from Imam-Bargah Nichari Alamdar Road in Quetta which culminated at its destination after Maghrib prayers. A control room equipped with CCTV cameras had also been set up to monitor the procession.

Huge contingents of police were deployed on the routes of processions and around imambargahs to avert any untoward incident.

In Azad Kashmir, small and big Alam, Zuljinah and Taazia processions were taken out in all 10 districts.

In Muzaffarabad, main procession was taken out from Central Imam Bargah which terminated at the same place after Maghrib prayer.

Youm-e-Ashur was also observed in Gilgit-Baltistan to pay reverence to supreme sacrifices rendered by Hazrat Imam Hussain (R.A.) and his companions. Processions were organized in all three divisions.

In Gilgit, the main Ashur procession started from Jama Imamia mosque in the morning which passing through traditional route culminated in same place in the evening. Gilgit-Baltistan administration made security plan to ensure protection of mourners during Ashur processions.

Meanwhile, traffic on Karakorum Highway between Rawalpindi and Gilgit-Baltistan was not suspended.

Pak-Afghan border at Chaman and Pak-Iran border at Taftan also remained closed on the 10th of Muharram-ul-Haram.