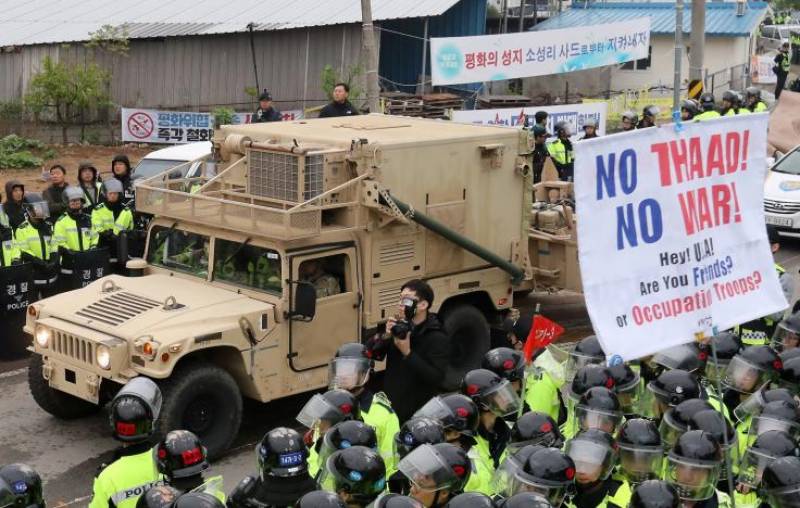 Seoul (Reuters): The United States military started moving parts of an anti-missile defense system to a deployment site in South Korea on Wednesday, triggering protests from villagers and criticism from China, amid tension over North Korea's weapons development.

The earlier-than-expected steps to deploy the Terminal High Altitude Area Defense (THAAD) system was also denounced by the frontrunner in South Korea's presidential election on May 9.

South Korea's defense ministry said elements of THAAD were moved to the deployment site, on what had been a golf course, about 250 km (155 miles) south of the capital, Seoul. "South Korea and the United States have been working to secure an early operational capability of the THAAD system in response to North Korea's advancing nuclear and missile threat," the ministry said in a statement.

The battery was expected to be operational by the end of the year, it said.

The United States and South Korea agreed last year to deploy the THAAD to counter the threat of missile launches by North Korea. They say it is solely aimed at defending against North Korea.

But China says the system's advanced radar can penetrate deep into its territory and undermine its security, while it will do little to deter the North, and is adamant in its opposition.

China is North Korea's sole major ally and is seen as crucial to U.S.-led efforts to rein in its bellicose, isolated neighbor.

The United States began moving the first elements of the system to South Korea in March after the North tested four ballistic missiles.

South Korea has accused China of discriminating against some South Korean companies operating in China because of the deployment.

The liberal politician expected to win South Korea's election, Moon Jae-in, has called for a delay in the deployment, saying the new administration should make a decision after gathering public opinion and more talks with Washington.

A spokesman for Moon said moving the parts to the site "ignored public opinion and due process" and demanded it be suspended.

Television footage showed military trailers carrying equipment, including what appeared to be launch canisters, to the battery site.

Protesters shouted and hurled water bottles at the vehicles over lines of police holding them back.

The Pentagon said the system was critical to defend South Korea and its allies against North Korean missiles and deployment would be completed "as soon as feasible".

More than 10 protesters were injured, some of them with fractures, in clashes with police, Kim Jong-kyung, a leader of villagers opposing the deployment, told Reuters.

Kim said about 200 protesters rallied overnight and they would keep up their opposition.

"There's still time for THAAD to be actually up and running so we will fight until equipment is withdrawn from the site and ask South Korea's new government to reconsider," Kim told Reuters by telephone.

A police official in the nearby town of Seongju said police had withdrawn from the area and were not aware of any injuries.

The United States and North Korea have been stepping up warnings to each other in recent weeks over North Korea's development of nuclear weapons and missiles in defiance of U.N. resolutions.

North Korea's nuclear and missile threat is perhaps the most serious security challenge confronting U.S. President Donald Trump. He has vowed to prevent North Korea from being able to hit the United States with a nuclear missile.

North Korea says it needs the weapons to defend itself and has vowed to strike the United States and its Asian allies at the first sign of any attack on it.

The United States is sending the USS Carl Vinson carrier strike group to waters off the Korean peninsula, where it will join the USS Michigan, a nuclear submarine that docked in South Korea on Tuesday. South Korea's navy has said it will hold drills with the U.S. strike group.

"It is a wild dream for the U.S. to think of depriving the DPRK of its nuclear deterrent through military threat and sanctions. It is just like sweeping the sea with a broom," the North's KCNA cited a foreign ministry spokesman as saying.

DPRK stands for the Democratic People's Republic of Korea, the North's official name.

China's envoy on North Korea, Wu Dawei, met his Japanese counterpart, Kenji Kanasugi, for talks in Tokyo and they agreed that they would "respond firmly" to any further North Korean provocation, Japan's foreign ministry said.

"We are against anything that might lead to war or chaos," Wu said.

"The brave artillerymen mercilessly and satisfactorily hit the targets and the gunshots were very correct, he said, adding that they showed well the volley of gunfire of our a-match-for-a-hundred artillery force giving merciless punishment to the hostile forces," KCNA cited Kim as saying.

There had been fears North Korea would mark the anniversary with its sixth nuclear test or a long-range missile launch.