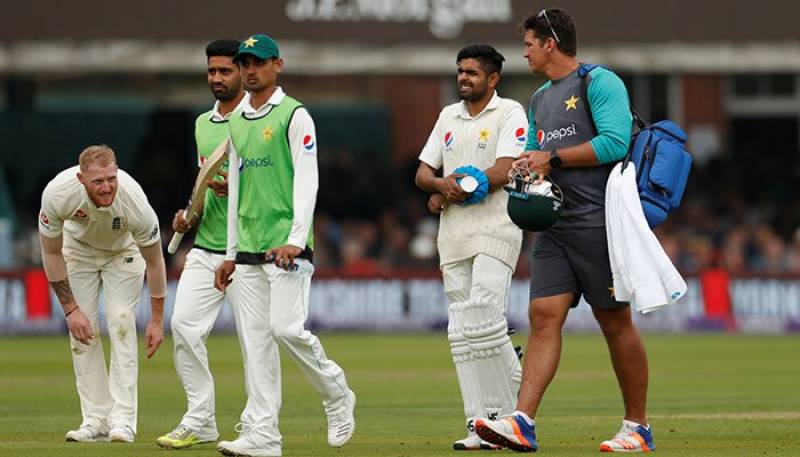 London, England (Agencies): Pakistan suffered a setback after dominating the second day's play in the first Test against England at Lord's on Friday when in-form batsman Babar Azam was ruled out of the rest of their tour with a fractured forearm.

According to details, Babar top-scored with 68 in Pakistan's stumps total of 350 for eight, a lead of 166 runs after they bowled England out for 184 in their first innings.

But he was forced to retire hurt before the close after being struck a painful blow by England pace bowling all-rounder Ben Stokes.

The 23-year-old Babar, for whom this was indeed an unlucky 13th Test, received sympathetic applause from a large crowd as he walked off after several minutes of on-field treatment

Babar was taken to a hospital for a scan which confirmed a fracture that will sideline him for at least six weeks.

He is now highly unlikely to play any further part at Lord's and will miss the second and final Test of a two-match series at Headingley that starts a week on Friday.

Team physiotherapist Cliffe Deacon told the Pakistan Cricket Board (PCB) media Twitter page: "The fracture's in the forearm, one of the two bones in the forearm called the ulna.

"It is pretty much just above the wrist of his forearm, which is why he couldn't hold his bat properly.

"Normally with these sort of fractures (the length of recovery) varies between four to six weeks."

The PCB added it had no intention to add a replacement batsman to the tour squad.