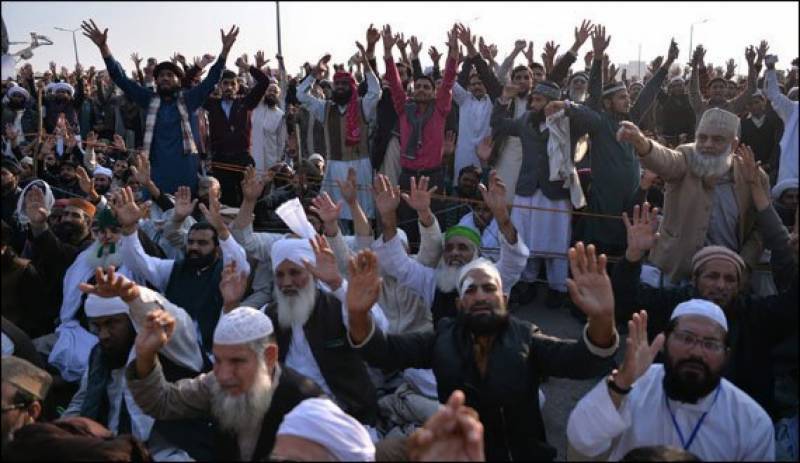 Islamabad (Staff Report): The government and Islamabad protesters have reached an agreement to end the protest, after the Federal Law Minister Zahid Hamid sent his resignation to Prime Minister Shahid Khaqan Abbasi.

The state owned Television channel reported the workers of religious parties will make the announcement to end the sit-in, shortly.

The agreement stated, an inquiry board will be set up so that action can be taken against those responsible for the controversial amendment to the Finality of Prophethood declaration for electoral candidates within 30 days.

It also includes the condition that the arrested workers of the religious parties will have to be released and cases against them dismissed. The decision comes in the wake of the protests that continue across the country, following Saturday's crackdown by the police and paramilitary personnel on Islamabad sit-in staged by a religious group.

The protesting Religious Party demanded the resignation of Federal Law Minister Zahid Hamid, after what he tendered his resignation to Prime Minister Shahid Khaqan Abbasi, which will be accepted later in the day.

The government tried to negotiate with the protesters while refusing the demand for the resignation of the Federal Law Minister, but all the talks of negotiations were unsuccessful until Zahid Hamid tendered his resignation.

However, Hamid said, "In order to restore peace in the country, I have decided to step down from my position."

Earlier, Pakistan Muslim League-Nawaz leader Nawaz Sharif formed the committee headed by Senator Raja Zafar-ul-Haq, to fix the responsibility for the introduction of the controversial amendment to the Finality of Prophethood declaration for electoral candidates.

Besides Haq, Federal Minister for Interior Affairs Ahsan Iqbal and Minister for Climate Change Mushahidullah Khan are also part of the committee.

On October 7, the committee was formed to probe the issue as it had attracted backlash from various quarters, even though the mistake was rectified soon after the amendment was made.

Later, the committee is expected to present a report related to the controversial amendment to the court.