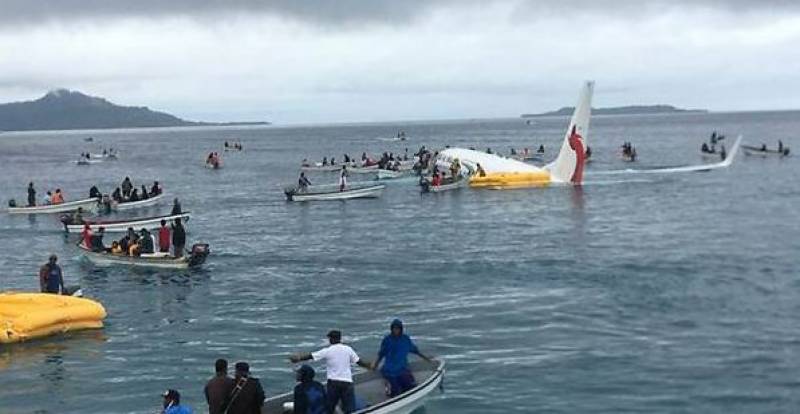 Wellington (Web Desk): A passenger plane of Papua New Guinean has submerged in a sea lagoon after it skidded off a runway during landing at the airport in the Federated States of Micronesia.

Fortunately, no casualty happened during the crash as all 36 passengers and 11 crew members of Air Niugini’s Boeing 737-800 were rescued safely after local fishermen and rescue teams reached the site immediately.

Reports of an Air Niugini 737 overrunning the runway in Chuuk, Micronesia (TKK). That's a 6,013-foot runway, which is on the shorter side for an airport with airline service. https://t.co/DKY11XENhV I flew into this airport in July, you can see how hard the braking is on landing. pic.twitter.com/1odaL4z8gy

Jimmy Emilio, Chuuk airport manager, said that passengers and crew were at the hospital undergoing checkups, adding that no serious injuries were reported.

No casualties. 35 passengers of #AirNiugini flight to #FSM that crashed into the sea in Chuuk have been evacuated to safety and taken to hospital. The flight was landing. pic.twitter.com/5nTOQZpin8

Videos posted to social media show dozens of people in boats around the wreckage to save the passengers and crew members before the lane drowned.