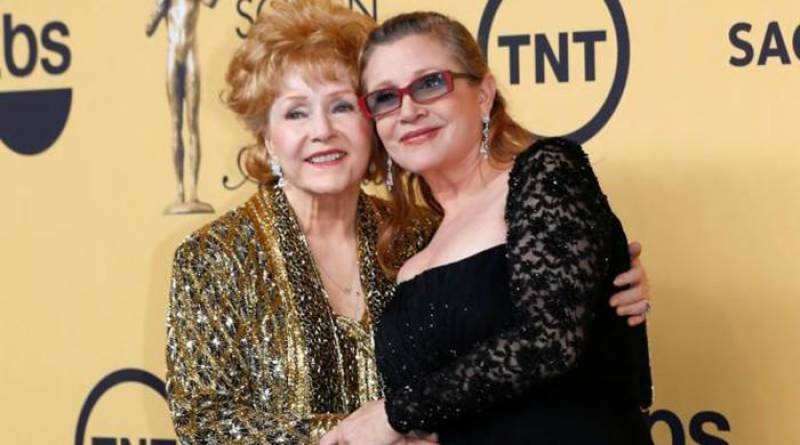 Los Angeles (Online): Film legend Debbie Reynolds, best known for classic musical "Singin' in the Rain" died after suffering a stroke, a day after the death of her movie star daughter Carrie Fisher.

The 84-year-old had been rushed to hospital in "fair to serious condition," paramedics told AFP, after collapsing at the Beverly Hills home of her son Todd Fisher around 1.00 pm (2100 GMT).

"She wanted to be with Carrie," he was quoted as telling industry weekly Variety magazine.

Celebrity news portal TMZ said Reynolds had died "as a result of a stroke," also citing her son.

Fisher, who catapulted to worldwide stardom as rebel warrior Princess Leia in the original "Star Wars" trilogy, died in Los Angeles on Tuesday, four days after suffering a heart attack on a transatlantic flight.

TMZ, citing unnamed family sources, said Reynolds had been at her son's house to discuss funeral arrangements when she became ill.

"Thank you to everyone who has embraced the gifts and talents of my beloved and amazing daughter," she posted on Facebook following her daughter's death.

"I am grateful for your thoughts and prayers that are now guiding her to her next stop."

She was later nominated for an Oscar and helped found a group that works to combat mental health issues.

Her 2013 autobiography "Unsinkable: A Memoir" detailed the highs and lows of her rocky personal life and a screen career forged in the glamour of Hollywood's "Golden Age" which was still going well into the 1990s.

Known at one time as the foremost collector of Hollywood memorabilia, Reynolds married singer Eddie Fisher in 1955 and had two children, Carrie and Todd. The couple divorced in 1959 after he fell for Elizabeth Taylor.

Born Mary Frances Reynolds on April 1, 1932 in El Paso, Texas, the second child of railroad carpenter Raymond Francis Reynolds and his wife Maxine, she came to the notice of Hollywood studio MGM after winning a California beauty contest at age 16.

She had never danced professionally, according to the Internet Movie Database, when picked to star opposite Gene Kelly in classic musical "Singin' in the Rain."

Several more MGM musicals followed, with Reynolds typically cast as a wholesome young heroine, before her Oscar-nominated turn in "The Unsinkable Molly Brown" (1964).

First, she had to overcome the humiliation of losing Fisher to her best friend and fellow screen icon, although the pair remained close until Taylor's death in 2011.

In another turn of misfortune, Reynolds's second husband, shoe magnate Harry Karl, gambled away most of her savings.

Her third marriage to real estate developer Richard Hamlett in 1985 wasn't much more successful, ending in divorce in 1996.

To support the family, Reynolds took jobs on the stage in Las Vegas, where she had her own casino that housed her extensive collection of memorabilia until it shut in 1997.

Reynolds, admired for her versatility, starred in her own sitcom, "The Debbie Reynolds Show," in 1969-1970, but it lasted just one season.

Her career in cinema was largely over by the 1970s, though she continued to star in TV movies and series. She also made regular personal appearances, acting on stage and portraying Liberace's mother Frances opposite Michael Douglas in 2013's "Behind the Candelabra."

"Bright Lights: Starring Carrie Fisher and Debbie Reynolds," a documentary about her relationship with her daughter, premiered at this year's Cannes Film Festival and is due to air on HBO in March.