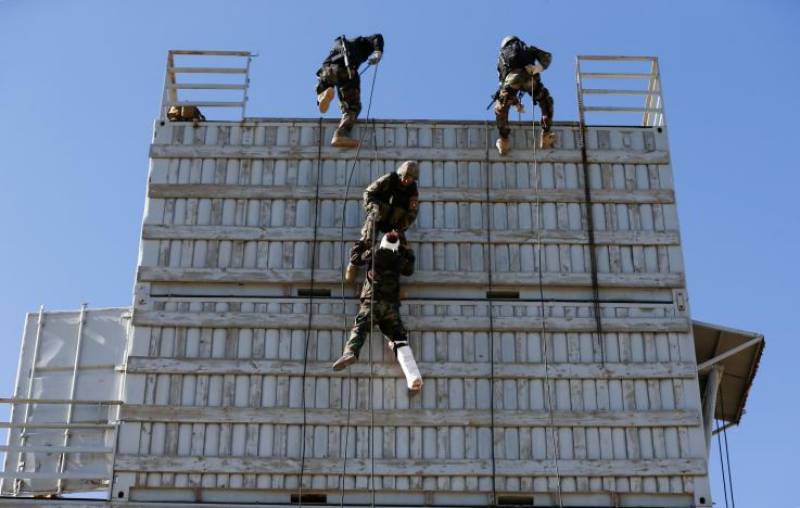 Kabul, Afghanistan (Reuters): Afghanistan plans to increase the number of elite Special Forces from 17,000 troops, officials said, part of a long-term strategy to bolster units stretched and exhausted by persistent attacks from Taliban insurgents and other Islamist militants.

Special Forces, who represent a small fraction of the 300,000-strong armed forces, have been carrying out nearly 70 percent of the army's offensive operations across the country, underlining Afghanistan's heavy reliance on them.

While regular forces, including police, are deployed largely to defend positions, Special Forces are taking the battle to militants from Kunduz in the north to Helmand in the south, sometimes working in tandem with U.S. counterparts.

Defence Ministry spokesman Dawlat Waziri said, "Our commando forces have to be strengthened and have to be better equipped."

Waziri declined to give exact numbers, saying only that the special operations division would be increased to the level of an army corps.

But three Afghan and Western officials, speaking on condition of anonymity, said that under current plans, Special Forces would double and the government was talking to foreign donors about contributing through funding and other assistance.

Salvin said, "It's going to take several years to grow to the level that (Afghan President Ashraf) Ghani currently envisions."

He further stated that recruitment and training was already underway for more commandos, as well as Special Forces support units like medical care, intelligence, logistics and communications.

On exercises at the Afghan army's special operations training base just outside Kabul, soldiers were confident that they could handle the workload.

Fawad Kamal, a Special Forces commander said, "There has been an increase in our operations, but we will keep up our efforts. There hasn't been any interruption."

When they reach the battlefield, newly trained troops will likely be conducting offensive operations, from tracking militant cells to clearing towns seized by insurgents.

Mohammed Arif, a new commando recruit said, "There is a huge need for the number of commandos and special forces to increase in the country. As long as they are well equipped, they can defend the country very well."

Afghanistan's international allies regularly praise the performance of the Special Forces, but there is also concern that the workload places them under too much strain.

Last year, the top U.S. commander in Afghanistan, General John Nicholson, discussed plans to strengthen and regenerate the force over the winter months.

At the Special Forces base, NATO trainers work alongside Afghan instructors, teaching a range of courses from basic shooting and room clearance for new commandos, to advanced leadership courses for the more experienced.

The NATO instructors are part of the Resolute Support mission involving some 13,000 international troops, more than half of them Americans, who train special and regular forces and sometimes advise Afghan troops on the battlefield.

A smaller U.S. counter-terrorism unit is engaged in fighting radical networks including al Qaeda and Islamic State, and often works closely with elite Afghan units in the field.

Nicholson said last month that thousands more advisers would be needed to help prepare Afghan forces to break the "stalemate" in the 15-year conflict, a factor U.S. President Donald Trump must consider when he decides his strategy for Afghanistan.

More than two years after the departure of most international troops, Afghan forces control just 57 percent of the country, compared with 72 percent a year ago, according to SIGAR, a Congressional oversight body.