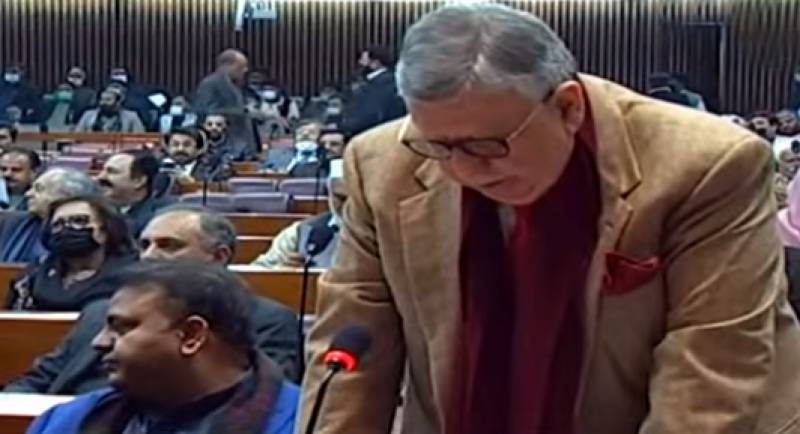 Speaker Asad Qaisar announced that detailed discussion on this legislative proposal would be held in the House and bill would not be referred the standing committee.

State Bank of Pakistan (SBP) Amendment Bill 2021 was also presented in the National Assembly. The bill was referred to the relevant committee for deliberation.

The House also adopted the resolution seeking extension in The Election (Third Amendment) Ordinance for 120 days.

The members from the opposition parties staged a vehement protest and chanted slogans to prevent Shaukat Tarin from presenting the bill.

Speaking on the occasion, Pakistan Muslim League-Nawaz (PML-N) leader Khawaja Asif said that the government had violated the Constitution by presenting an ordinance that had already lapsed and expired.

You're giving SBP's control to IMF. "Please have mercy on the people of Pakistan. Don't sell Pakistan," the PML-N leader said, adding that the PTI-led government is trying to "enslave Pakistanis financially."

He urged the House to not let Pakistan surrender its sovereignty.

Khawaja Asif said the whole nation was ashamed of what was happening in the parliament.

Adviser to the Prime Minister on Parliamentary Affairs Dr Babar Awan responded that the assembly proceedings were being carried out under the prescribed rules and procedures.

He said that inflation, unemployment and the shortage of gas and other commodities have already ruined the lives of the people in Pakistan.

“Now, if a mini-budget is on the cards that would increase their [peoples’] difficulties, then everyone sitting in the House should resist the move,” the PPP leader said.

The speaker also ruled that the resolution for extension in the election amendment ordinance was legitimate.

Foreign Minister Shah Mehmood Qureshi said the opposition had the right to present its point of view, however, "the government's job is to put forth facts before people".

As Qureshi continued to speak, the opposition members pointed towards an incomplete quorum in the House.

Responding to the opposition's objection, the speaker adjourned the session till December 31.

Earlier in the day, the federal cabinet approved “The Finance Supplementary Bill 2021”.

In a tweet, Minister for Information and Broadcasting Fawad Chaudhry confirmed the approval of the finance bill by the federal cabinet.

He said tax exemptions worth just Rs2 billion will be reviewed under this bill that is concerned with the common man.

The minister said no sales tax had been imposed under the bill on tractors, medicines and fertilizers.

“Top priority of our government is to strengthen institutions by making them independent,” Tarin said.

The minister said under the State Bank of Pakistan (Amendment) Bill 2021, the SBP will be held accountable to the Parliament, strengthening the country's law making institute.

He said that the Pakistan Tehreek-e-Insaf (PTI)-led government has not borrowed a single rupee from the SBP during the last two and a half year.