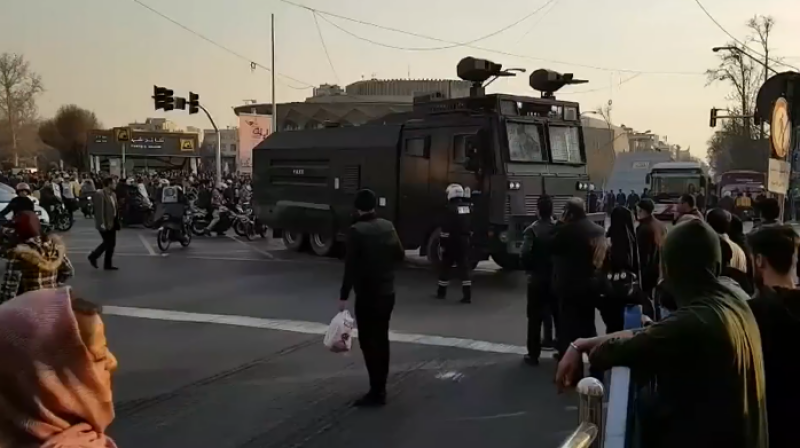 London (Reuters): Anti-government protesters demonstrated in Iran on Sunday in defiance of a warning by authorities of a crackdown, extending for a fourth day one of the most audacious challenges to the clerical leadership since pro-reform unrest in 2009.

Giving his first public reaction to the protests, President Hassan Rouhani appealed for calm, saying Iranians had the right to protest and criticize the authorities.

But he warned, according to official media: “The government will show no tolerance for those who damage public properties, violate public order and create unrest in the society.”

Tens of thousands of people have protested across the country since Thursday against the Islamic Republic’s government and clerical elite.

Police in the center of Tehran fired water cannons to try to disperse demonstrators, according to pictures on social media.

Demonstrations turned violent in Shahin Shahr in central Iran. Videos showed protesters attacking the police, turning over a car and setting it on fire. Reuters could not immediately verify the authenticity of the footage.

There were also reports of demonstrations in the western cities of Sanandaj and Kermanshah as well as Chabahar in the southeast and Ilam and Izeh in the southwest.

Demonstrators initially vented their anger over economic hardships and alleged corruption, but the protests took on a rare political dimension, with a growing number of people calling on Supreme Leader Ayatollah Ali Khamenei to step down.

Iranian security forces appear to have shown restraint to avoid an escalation of the crisis. Two people have been killed and hundreds arrested.

The protests were the biggest since unrest in 2009 that followed the disputed re-election of then-President Mahmoud Ahmadinejad.

Videos showed people in central Tehran chanting: “Down with the dictator!” in an apparent reference to Khamenei.

Protesters in Khorramabad in western Iran shouted: “Khamenei, shame on you, leave the country alone!”

The government said it would temporarily restrict access to the Telegram messaging app and Instagram, owned by Facebook Inc, state television said. There were also reports that mobile access to the internet was being blocked in some areas.

“Iran, the Number One State of Sponsored Terror with numerous violations of Human Rights occurring on an hourly basis, has now closed down the Internet so that peaceful demonstrators cannot communicate. Not good!” U.S. President Donald Trump tweeted on Sunday.

The White House said in a statement later on Sunday that the Iranian people’s “voices deserve to be heard.”

“We encourage all parties to protect this fundamental right to peaceful expression and to avoid any actions that contribute to censorship,” the statement said.

An Iranian reached by telephone, who asked not to be named, said there was a heavy presence of police and security forces in the heart of the capital.

“I saw a few young men being arrested and put into police van. They don’t let anyone assemble,” he said.

A video showed a protester being arrested by police while a crowd shouted: “Police, go and arrest the thieves!” in the northwestern city of Khoy.

Demonstrators also shouted: “Reza Shah, bless your soul.” Such calls are evidence of a deep level of anger and break a taboo. The king ruled Iran from 1925 to 1941 and his Pahlavi dynasty was overthrown in a revolution in 1979 by Ayatollah Ruhollah Khomeini, the Islamic Republic’s first leader.

Economic indexes have improved under Rouhani’s government and the economy is no longer in dire straits. But growth has been too slow for an overwhelmingly youthful population, far more interested in jobs and change than in the Islamist idealism and anti-Shah republicanism of the 1979 revolution.

The demonstrations are particularly troublesome for Rouhani’s government because he was elected on a promise to guarantee rights to freedom of expression and assembly.

His main achievement is a deal in 2015 with world powers that curbed Iran’s nuclear program in return for a lifting of most international sanctions. But it has yet to bring the economic benefits the government promised.

Ali Asghar Naserbakht, deputy governor of Tehran province, was quoted as saying by ILNA that 200 protesters had been arrested on Saturday.

Tehran prosecutor Abbas Jafari Dolatabadi said some of those arrested had confessed “they were carried away by emotions and set fire to mosques and public buildings”, adding they would face severe punishment.

“After giving thousands of martyrs for the Revolution, the nation will not return to dark era of Pahlavi rule,” he said.