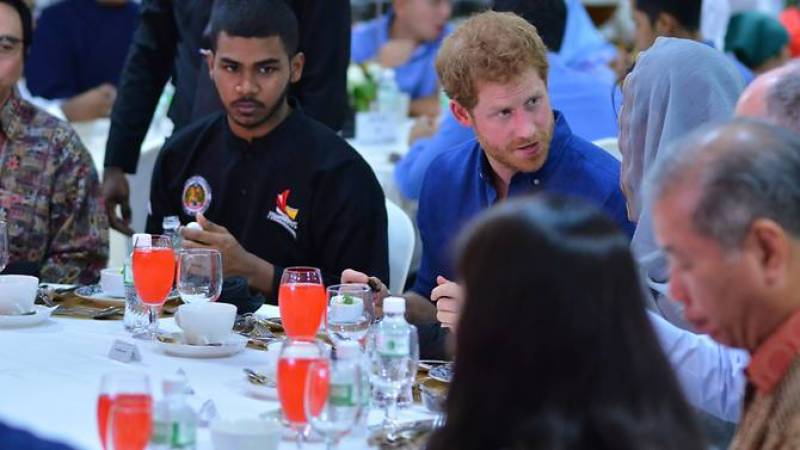 Singapore (Web Desk): Britain's Prince Harry opened his visit to Singapore by breaking fast with local Muslims – as words of sympathy were said for the victims of the London terror attack.

Harry, who is on a two-day trip to Singapore, was visiting a community centre run by a Muslim-faith led voluntary welfare organization called Jamiyah Singapore; which voices a range of services including help for recovering addicts to residential homes for young people.

On his arrival there, Prince Harry received a traditional welcome from ten kompang (Malay hand drum) players, a customary way to mark a celebratory occasion in Malay culture. He was also given a silat demonstration, led by former world champion Sheik Alauddin Yacoob Marican.

As the sun started to set, he joined around 80 young Muslims for iftar.

After breaking fast, the prince sat at a number of tables so that he could chat with guests about the celebration, Channel NewsAsia reported. Dr Mohd Hasbi Abu Bakar, president of Jamiyah Singapore said: "Ramadan is a time of reflection, for spending time with family and friends while giving support to those who are less fortunate. We are honoured that Prince Harry was able to join us for this iftar and to meet with the young people that are part of the Jamiyah Singapore community."