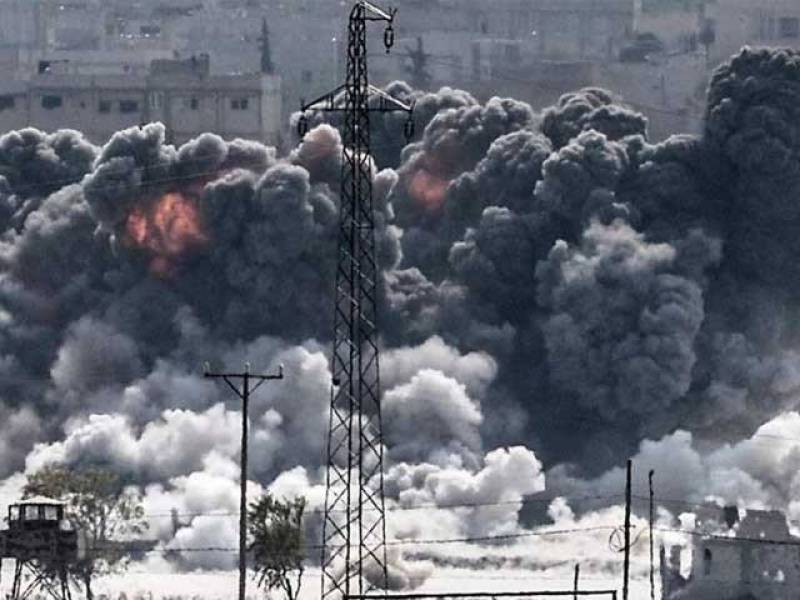 Washington (Reuters): The United States launched 60 cruise missiles at a Syrian airfield on Thursday night in response to what it believes was Syria's use of banned chemical weapons that killed at least 100 people. Sharply escalating the U.S. military role in Syria, two U.S. warships fired dozens of cruise missiles from the eastern Mediterranean Sea against the airbase controlled by Assad's forces in response to the poison gas attack on Tuesday in a rebel-held area, U.S. officials said.

U.S. officials insisted they informed Russian forces ahead of the missile attacks and that there were no strikes on sections of the base where Russians were present. But they said the administration did not seek Moscow's approval. "Years of previous attempts at changing Assad’s behavior have all failed and failed very dramatically," Trump said from his Florida resort, Mar-a-Lago, where he was attending a summit with Chinese President Xi Jinping.

Trump ordered the strikes just a day after he pointed the finger at Assad for this week's chemical attack, which killed at least 70 people, many of them children, in the Syrian town of Khan Sheikhoun. The Syrian government has denied it was behind the attack.

Fifty-nine Tomahawk missiles were launched from the USS Porter and USS Ross around 8:40 p.m. EDT, striking multiple targets - including the airstrip, aircraft and fuel stations - on the Shayrat Air Base, which the Pentagon says was used to store chemical weapons. The attacks spurred a modest flight to safety in global financial markets, sending yields on safe-haven U.S. Treasury securities to their lowest since November. Stocks weakened in Asia and U.S. equity index futures slid, indicating Wall Street would open lower on Friday. Prices for oil and gold both rose, and the dollar slipped against the Japanese yen.

Trump said: "Syrian dictator Bashar al-Assad launched a horrible chemical weapons attack on innocent civilians. ... Tonight I ordered a targeted military strike on the airfield in Syria from where the chemical attack was launched."

"It is in this vital national security interest of the United States to prevent and deter the spread and use of deadly chemical weapons," Trump said.

"There can be no dispute that Syria used banned chemical weapons, violated its obligations under the chemical weapons convention and ignored the urging of the U.N. Security Council," he added.

Trump appeared to have opted for measured and targeted air attacks instead of a full-blown assault on Assad's forces and installations.

"We feel the strike itself was proportionate," said U.S. Secretary of State Rex Tillerson.

The relatively quick response to the chemical attack came as Trump faced a growing list of global problems, from North Korea and China to Iran and Islamic State, and may have been intended to send a message to friends and foes alike of his resolve to use military force if deemed necessary.

“One question is whether Russia will respond in any meaningful way,” said a senior U.S. official involved in planning the raid. “If they do, they will be further complicit in the actions of the Syrian regime." Trump said earlier on Thursday that "something should happen" with Assad but did not specifically call for his ouster.

Officials from the Pentagon and State Department met all day to discuss plans for the missile strikes.

U.S. military action put the new president at odds with Russia, which has air and ground forces in Syria after intervening there on Assad's side in 2015 and turning the tide against mostly Sunni Muslim rebel groups.

The risks have grown worse since 2013, when Barack Obama, Trump's predecessor, considered and then rejected ordering a cruise missile strike in response to the use of chemical weapons by Assad's loyalists.

Only last week, U.S. Ambassador to the United Nations Nikki Haley said the U.S. diplomatic policy on Syria for now was no longer focused on making Assad leave power, one of Obama's aims.

But Trump said on Wednesday the gas attack in Idlib province, which sparked outrage around the world, had caused him to think again about Assad.

Speaking just before the strikes were announced, Russia's deputy U.N. envoy, Vladimir Safronkov, warned of "negative consequences" if the United States went ahead with military action, saying the blame would be “on shoulders of those who initiated such doubtful and tragic enterprise.”

The deployment of military force against Assad marked a major reversal for Trump.

Obama set a “red line” in 2012 against Assad’s use of chemical weapons. When Obama then threatened military action after a 2013 chemical attack, Trump issued a series of tweets opposing the idea, including “Do NOT attack Syria, fix U.S.A.”

Obama backtracked on the air strikes, and after the latest attack, Trump was quick to blame his Democratic predecessor for “weakness and irresolution” that he said emboldened Assad.