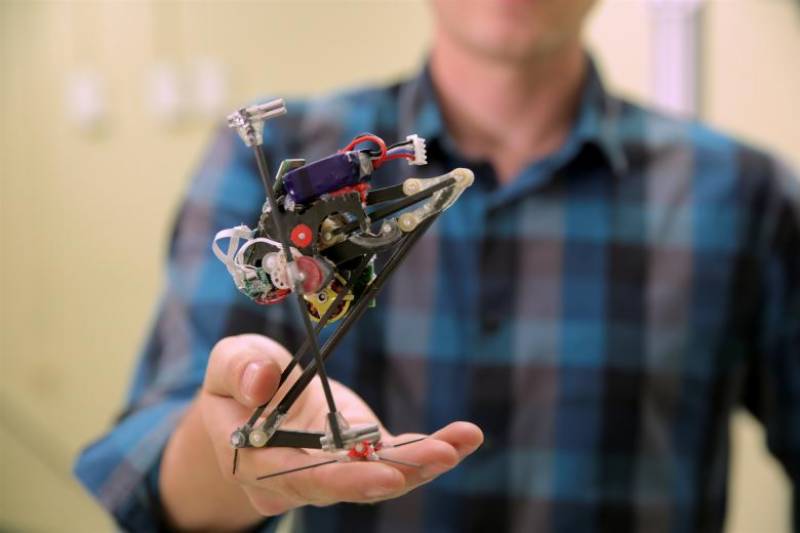 Berkeley: The scientists created a new robot inspired by the remarkable African primate called a galago, a small robot with unique leaping capabilities they hope can someday be used in tricky search-and-rescue situations.

The scientists said that they had developed a robot, named Salto, with vertical jumping agility like no other machine, able to leap into the air and then spring off a wall, or perform multiple vertical jumps consecutively.

In designing mobile robots, researchers sometimes mimic the way animals move. For example, some robots slither over terrain like a snake. In this case, the researchers sought to create a robot that might need to hurdle impediments as it traverses difficult terrain like the rubble of a building wrecked by an earthquake.

The researchers of the University of California, Berkeley sought inspiration from one of the animal kingdom's best leapers to design Salto, short for "saltatorial locomotion on terrain obstacles".

The galago, or bushbaby, is a relatively small, typically night-active and tree-dwelling primate. It is an agile leaper and can hop high in the air on two legs while on the ground. The goal was to build a robot better at leaping than any other.

The robotics researcher Duncan Haldane, who led the study published in the journal Science Robotics said, "We looked to biology for inspiration because it's fair to say that animals can outclass any robot when it comes to jumping."

"Our goal was to have a search-and-rescue robot small enough to not disturb the rubble further (and) move quickly across the many kinds of rubble produced by collapsed buildings."

The galago jumps so well because it stores energy in its tendons when it is in a crouched position and can then spring into the air. The researchers adapted that into Salto by using a motorized, spring-loaded leg mechanism that lets the robot get into the same type of crouched position.

UC-Berkeley electrical engineering and computer sciences professor Ronald Fearing, who heads the lab where Salto was developed aslo stated, "We're particularly interested these days in seeing if we cannot just match but exceed the performance of animals."

"The more we understand about how animals move and how to use the available engineering technologies, the closer we can get to that point."

Apple is secretly developing its own MicroLED screens: Bloomberg