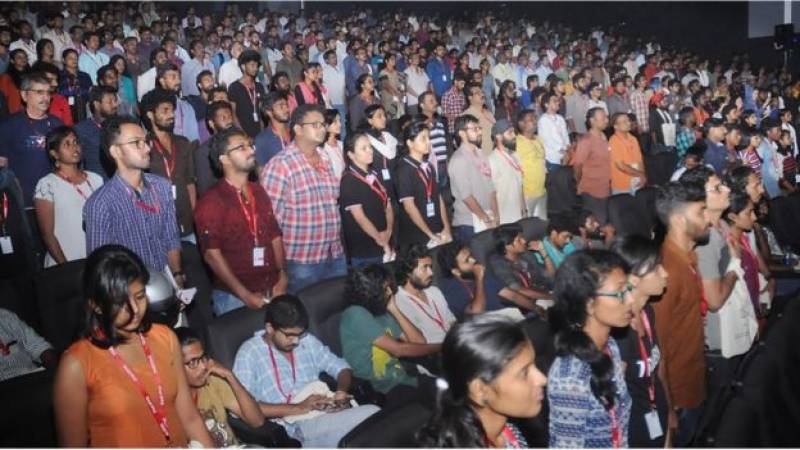 Mumbai (Web Desk): At least twelve people were arrested at a cinema in India, after they remained seated while the national anthem played.

The cinemagoers, who were attending an international film festival in the city of Trivandrum in Kerala, were later freed but they face charges of "failure to obey an order issued by a public servant, thereby causing obstruction or annoyance to others".

And at a cinema in Chennai, eight people who did not stand for the anthem were assaulted and abused, police said. The eight were later charged with showing disrespect to the anthem, BBC reported.

The arrests and reports of assault follow last month's Supreme Court ruling that the national anthem be played before every film and that audiences stand while it is played - and they make it clear that authorities are taking the ruling seriously.

"If we did not sit on chairs, I thought we would lose the seats," one detainee told the Indian Express.

The controversial ruling - cheered by the ruling Hindu nationalist BJP - comes at a time of routine demands on Indians to display patriotism, and this is not the first time people have been targeted for not respecting the national song.

In October, a disabled man who had been carried from his wheelchair to a seat, described how he was assaulted by other members of the audience for not standing for the anthem.

In the past three years, people have been thrown out cinemas and even charged with sedition for not standing up for the anthem.

A 1971 law makes any obstruction to the singing of the song "or causing disturbances to any assembly engaged in such singing" punishable by a three-year prison term and/or a fine.