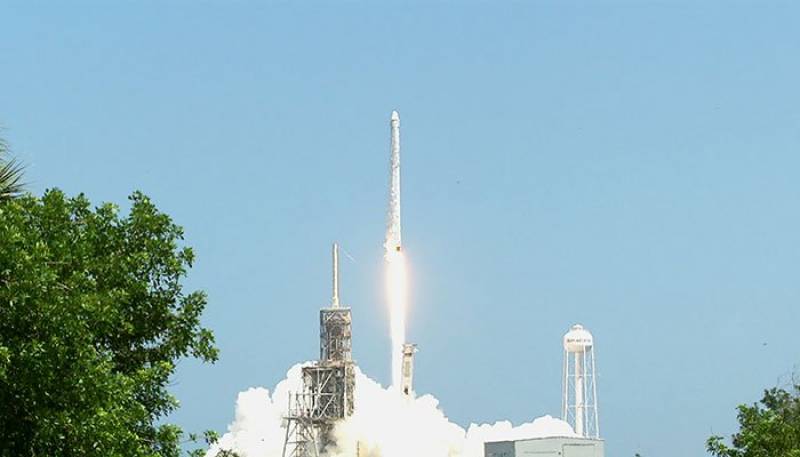 Miami, Florida (Online): SpaceX on Monday blasted off its unmanned Dragon cargo ship toward the International Space Station, carrying a host of science experiments and the most powerful computer ever sent into orbit.

"Three, two, one, and liftoff," a SpaceX commentator said as the white Falcon 9 rocket climbed into the blue sky over Cape Canaveral, Florida at 1631 GMT.

Three minutes after launch, the rocket separated as planned, with the long, tall portion - known as the first stage - arcing back toward Earth and the second stage continuing to propel the cargo ship to space.

The first stage of the rocket then powered its thrusters and operated its grid fins to set itself down on solid ground at Cape Canaveral for a controlled, upright landing at Landing Zone 1.

Clouds of brown dust encircled the rocket as it touched down.

A SpaceX commentator said, "X marks the spot for yet another picture perfect landing."

The California-based company, headed by Internet entrepreneur Elon Musk, has successfully landed multiple rockets on land and on ocean platforms, as part of its ongoing effort to re-use costly rocket components instead of jettisoning them into the ocean.

Moments later, SpaceX confirmed that the Dragon had safely arrived in the correct orbit around the Earth. It will arrive at the ISS on Wednesday.

The mission is the 12th of 20 supply trips under a $1.6 billion SpaceX contract with NASA to send supplies to the astronauts living at the space station.

The cargo ship is packed with 2,900 kilograms of supplies, including a sophisticated super-computer made by Hewlett Packard Enterprise (HPE), called The Spaceborne Computer.

The goal is to test the computer for one year to see if it can operate in the harsh conditions of space, about the same amount of time as it would take for astronauts to arrive at Mars.

If it survives the intense space radiation, such computers could help crew operate on long-duration missions to deep space.

NASA has said it hopes to send the first astronauts to Mars by the 2030s.