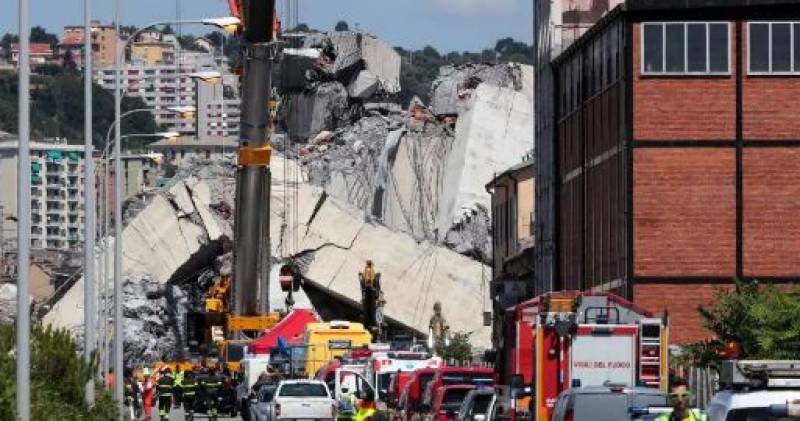 Genoa (Agencies): The toll of Genoa’s bridge collapse rose to 43 Sunday as rescuers confirmed they had found the remains believed to be of a missing family, a day after Italy held a funeral for the disaster victims.

Firefighters discovered the three bodies, reported to be those of a couple and their nine-year-old daughter, overnight inside a car extracted from the rubble of the viaduct.

The findings mean that all those reported missing after Tuesday's tragedy have now been accounted for, although rescuers said the would continue combing the wreckage.

"The fire service is continuing its inspection of the area in order to rule out the eventual presence of people not reported missing."

The announcement followed the discovery Saturday of the body of a labourer in his 30s in the rubble and the death of another man in hospital.

The disaster has caused public outrage and unleashed a fierce debate over the state of Italy´s infrastructure.

Rome has blamed the collapse on Autostrade per l´Italia, which manages almost half of the country's motorway network including the stricken A10 road.

The prosecutor investigating the bridge collapse has criticised past management of Italy´s infrastructure.

Francesco Cozzi said the state had "abdicated" its responsibility to ensure road safety by handing motorway management to the private sector, in an interview published Sunday.

"The philosophy of our system today sees a state stripped of its powers, a sort of absent owner," he told the Corriere Della Sera newspaper.